Northeast to be cut off by rail link till August 28

The Railways has also made arrangements to run two special train services from Guwahati so that passengers can reach West Bengal. 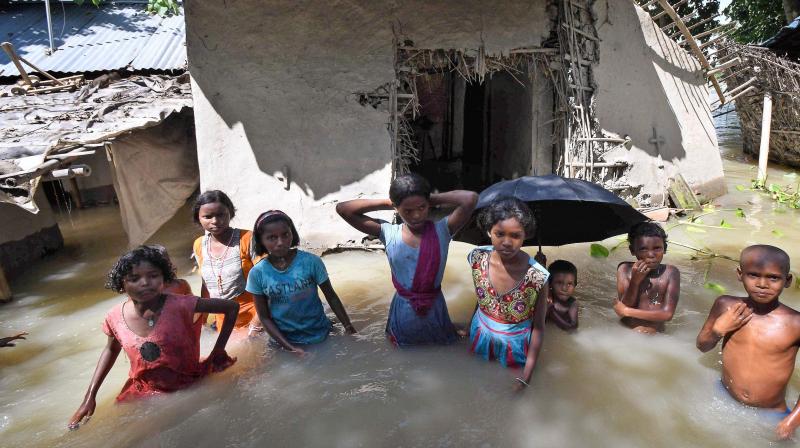 Children stand waist-deep in flood water as they wait for rescue workers in Katihar on Saturday. (Photo: PTI)

Guwahati: The water levels of the Brahmaputra and its tributaries has started receding very fast but rail link to northeastern states would remain snapped till August 28, posing a serious threat to shortage of essential items to the region.

The Northeast Frontier Railways on Saturday said that they have already started restoration work of railway tracks, washed away in flood in Katihar zone but it would not be possible on or before August 28. It is significant that the rail connectivity between the Northeast and rest of India remained cut for eighth consecutive day on Saturday.

The Railways has also made arrangements to run two special train services from Guwahati so that passengers can reach West Bengal. Meanwhile, the death toll in the current wave of flood in Assam has touched 60 with 11 more cases reported from different parts of the state.

According to flood bulletin of the state government 25,93,314 people in 2,210 villages under 63 revenue circles of 20 districts are still reeling under floodwaters, while a total crop area of 1,22,976 hectares in these districts are still submerged.

The state supply department has ruled out the crisis of essential food item in the state but admitted that the supply of essential commodities, including food grains, has hit because of the lack of trains, which in turn has led to a price rise across the northeastern region.