Bishop said the right to freedom of navigation must be ensured as it its crucial for trade. 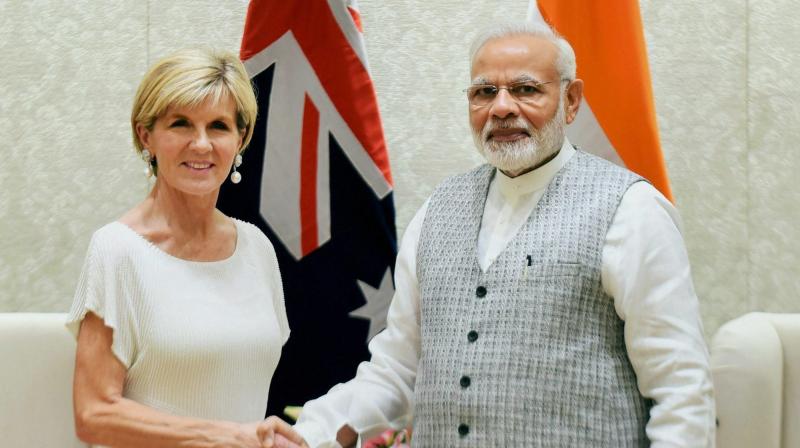 New Delhi: Visiting Australian foreign minister Julie Bishop on Wednesday said that Australia opposed Beijing’s construction of artificial reefs and their militarisation in the disputed South China Sea, holding that freedom of navigation must be ensured.

The minister, in a lecture in New Delhi, said that at the same time there was a need to engage with Beijing as it would be in no one’s interest to see the Chinese economy falter.

“Rising nationalism is leading to a narrow definition of national interest and a more transactional approach in negotiations. These factors reduce the prospects of multilateral cooperation in collective interest,” said Ms Bishop.

China has constructed artificial reefs in the  South China Sea and has been ramping up military infrastructure there despite opposition from countries like Vietnam and Philippines, which are involved in the territorial dispute.

“We continue to oppose the construction of artificial reefs and militarisation of those structures in the South China Sea,” Ms Bishop said.

India has commercial interests in the South China Sea and has been pressing for resolving the dispute as per the United Nations Convention on the Law of the Sea, besides advocating freedom of navigation in the resource-rich area.

Bishop said the right to freedom of navigation must be ensured as it its crucial for trade.

"It is important that all states respect international laws including the United Nation's Convention on the Law of the Sea (UNCLOS) using it as a guide to resolve disputes," she said while delivering the Second Indo-Pacific Oration, organised by think-tank ORF and the Australian High Commission.

"Our objective must be to encourage China to exercise its economic and strategic weight in a way that respects the sovereign equality of states that upholds and strengthen the rules-based order and benefits all nations," she said.

The Australian foreign minister also "applauded" India for successfully and peacefully resolving a long-running maritime dispute with Bangladesh in 2014 under the provisions of the UNCLOS.