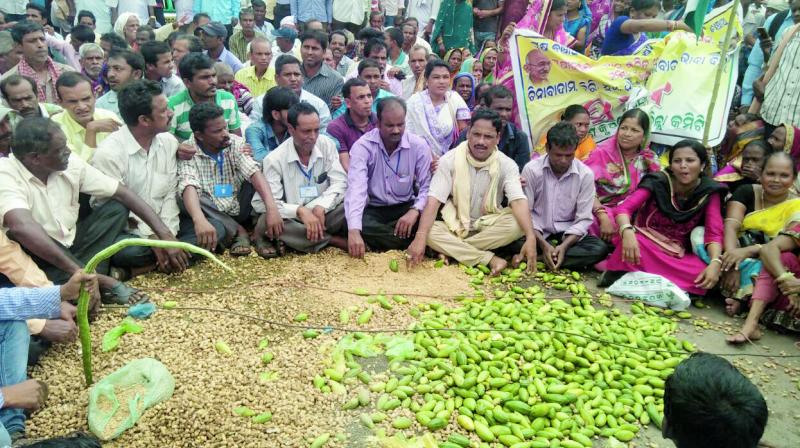 Bhubaneswar: Hundreds of farmers under the banner of Navnirman Krushak Sangathan (NKS), an Odisha-based farmers’ outfit, on Wednesday dumped vegetables, pulses, milk and peanuts on a road at Chandikhole Chhak in Jajpur, protesting distress sale of their agriculture produce.

Farmers of the district, who are battling distress sale, alleged that they had earlier submitted a memorandum to the Jajpur collector, seeking his intervention to ensure actual prices of their produce but it didn’t yield any results.

“The farmers had earlier submitted a memorandum to the collector seeking his intervention to ensure due prices for their produce. However, there has been no response from the district administration, till now. Hence, they hit the streets today,” farmers’ leader Akshaya Kumar said. He added that they were demanding price, prestige and pension, besides crop loan waiver.

At a Chasi Samavesh organised by the Jajpur district committee of the NKS, Soumya Ranjan Patnaik, NKS advisor, said the development of the nation was not possible without solving the problems of the farmers. “All governments should now learn that until they bring agriculture and farmers to the central focus of their policies, they will have to face such satyagrahas.”

“We want to give a message to all political parties through this protest that they should stop shedding crocodile tears for farmers. What were the parties doing when farmers were committing suicide?” he asked. “The farmers of Odisha are not getting the right amount for their produce. The earnings are not sufficient to repay the crop loans,” he added.

Agriculture minister Dr Damodar Rout said the state government had formed an inter-ministerial committee to look into the farmers’ demand and the committee would soon come out with its recommendations. “Odisha is a strange state where the land owners are not the real farmers. Share-croppers till the land and grow crops, but they do not get any incentives or compensations against crop losses. The inter-ministerial committee is looking into all these issues,” said Dr Rout.