The votes would be counted on four separate tables and there would be eight rounds of counting. 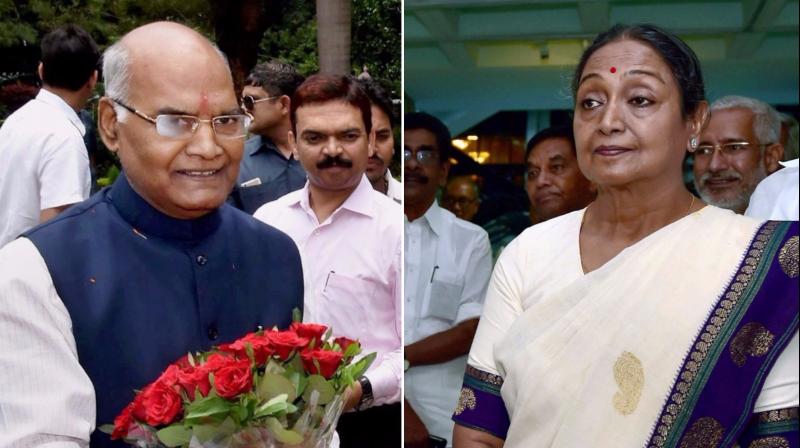 New Delhi: The counting for the presidential election held on Monday began Thursday morning and the name of the next occupant of the Rashtrapati Bhawan would be known by 5 pm.

Ram Nath Kovind, NDA's candidate and the former Bihar governor, is contesting against the Opposition's joint candidate and former Lok Sabha speaker Meira Kumar. As of 1:30 pm, Kovind was leading with 60,683 votes, while Kumar got 22,941.

According to Lok Sabha secretary general Anoop Mishra, who is also the returning officer of the election, the counting began at 11 am. First, the ballot box of Parliament House would be opened, and then, the ballot boxes received from states would be counted on alphabetical basis.

The votes would be counted on four separate tables and there would be eight rounds of counting.

Close to 99 per cent voting was recorded for electing India's next president.

The numbers are stacked in favour of the ruling coalition's nominee Ram Nath Kovind over the opposition's candidate Meira Kumar.

Thirty two polling stations including the one in Parliament house, were set up in various states.

A total of 4,896 voters – 4,120 MLAs and 776 elected MPs – were eligible to cast their ballot. MLCs of states with legislative council are not part of the electoral college.

On the day of the voting, the BJP had exuded confidence that Kovind would win with a "comfortable" margin.

"Kovind ji will win (the election) with a respectable and comfortable margin," Union minister M Venkaiah Naidu had said.

Union Minister Ravi Shankar Prasad said Kovind will register a "decisive victory" and would turn out as an "honest" president, who, he said, will work hard according to the Constitution.

The Opposition had said the fight between Kovind and Kumar was "one of ideologies" and rated the latter as the best choice for the president's post.

"The president should be a person pursuing an ideology under which everybody should be equal for him. And when there is a clash of ideologies, I think our candidate (Kumar) is the best," Congress leader Ghulam Nabi Azad had said on Monday.