Governor Acharya had no option but to sack Mr Liezietsu for violating his directive that followed the high court’s order. 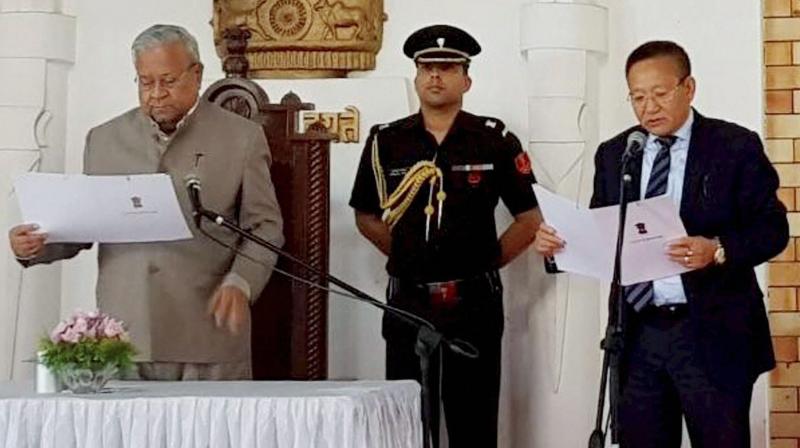 T. R. Zeliang being sworn-in as the new chief minister of Nagaland by Governor PB Acharya at a ceremony in Kohima. (Photo: AP)

Guwahati: In a dramatic turn of events, Nagaland governor P.B. Acharya on Wednesday administered the oath of office to T.R. Zeliang as the new chief minister of the state soon after Shurhozelie Liezietsu, the state’s chief minister till Wednesday morning, failed to turn up in the state Assembly to prove his majority.

Governor Acharya had no option but to sack Mr Liezietsu for violating his directive that followed the high court’s order.

Mr Liezietsu, who became the state’s chief minister in February by replacing Mr Zeliang, had claimed to have the support of 47 legislators in the House of 59 MLAs. Both leaders are MLAs of Naga People’s Front.

Though, the governor has given Mr Zeliang time till Saturday, sources said that he would prove his majority on the floor of the House by Friday.

Earlier, dismissing the government headed by Mr Liezietsu and inviting former chief minister Zeliang to form the new government in the state, the governor said: “According to reports received from the Nagaland Legislative Assembly, chief minister Shurhozelie Liezietsu did not attend the emergent Assembly session convened on July 19 at 9.30 am for the purpose of testing majority of the Cabinet led by him. 48 MLAs including Speaker attended the session. Therefore it is obvious that Mr Liezietsu has failed to obtain vote of confidence despite the repeated opportunity given to him... By virtue of powers vested in me by Clause (1) of Article 164 of the Constitution of India, I, Mr P.B. Acharya, Governor of Nagaland hereby withdraw my pleasure from chief minister of Nagaland and the council of ministers headed by Mr Shurhozelie Liezietsu is hereby dismissed with immediate effect.”

The governor had directed the Speaker Imtiwapang Aieyer to summon a special session of the Assembly at 9.30 am for the chief minister, who is facing a rebellion from MLAs of his party Nagaland Peoples Front (NPF), to seek a confidence vote.

Mr Zeliang, leader of the rebel NPF MLAs, who has been chief minister once before, was present in the House along with his followers.

The motion to prove the majority of the chief minister could not be taken up as he was not present and the House was adjourned sine die, the Speaker informed the governor.