Not just Hindi, even English faced the heat of pro-Kannada activists in Karnataka earlier. 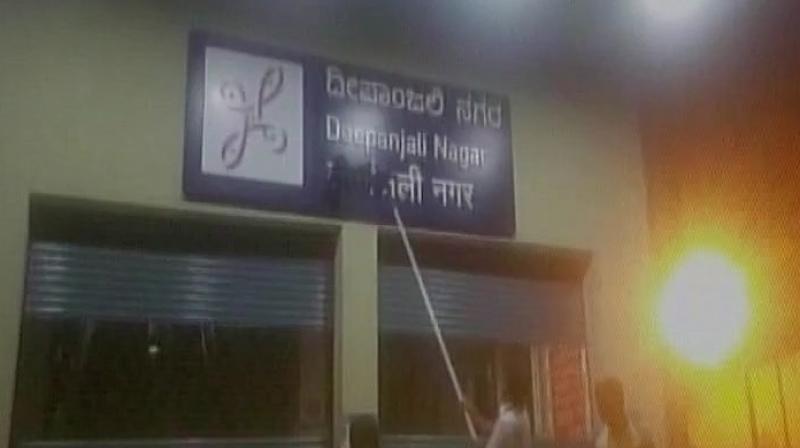 Bengaluru: The anti-Hindi agitation seems to be growing with each passing day, as the members of the Karnataka Rakshana Vedike (KRV) blackened words written in Hindi on the signboard outside Yeswanthpur metro station.

On Wednesday night, the members took up the task of blackening the Hindi words written on almost all metro stations, including Jaynagar, Peenya, Deepanjali Nagar, Mysore Road, and Yashwanthpura metro stations.

Not just Hindi, even English faced the heat of pro-Kannada activists in Karnataka earlier.

On July 6, the KRV defaced English and Hindi signage of a restaurant in a mall near Bengaluru's Eco tech park.

After the anti-Hindi Twitter campaign, #NammaMetroHindiBeda ('Our Metro, We don't want Hindi'), Hindi words on the signboards of two Metro stations - Chickpete and Majestic - were covered with paper and taped on July 3.

These metro boards were in Kannada, English and Hindi.

Karnataka CM Siddaramaiah has reportedly supported the anti-Hindi brigade and has asked the officials to find out what policy was followed in non-Hindi states like Tamil Nadu, Kerala, West Bengal, and etcetera.

Following the Chief Minister's directive, the Kannada Development Authority on July 4 had issued issued notice to the Bangalore Metro Rail Corporation Ltd (BMRCL) and sought an explanation why it was using three-language policy.

Earlier this year, the Centre notified a recommendation of the Parliamentary panel after President Pranab Mukherjee gave his nod to the suggestion.

The Parliamentary panel had recommended the use of Hindi by parliamentarians and ministers. The recommendation had been sent to the President in June, 2011.

In Bengaluru, protests have been taking place over Hindi being used as a language in the Metro train sign boards.