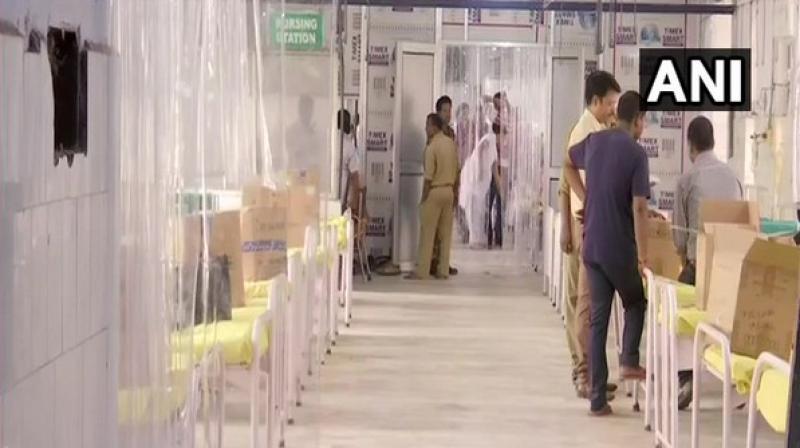 The death toll due to encephalitis touched 117 on Thursday morning in Muzaffarpur district. (Photo: ANI)

Muzaffarpur: Following the public outcry over lack of facilities in the government-run Shri Krishna Medical College and Hospital (SKMCH), the hospital management has converted a prisoners' ward into an Intensive Care Unit (ICU) to accommodate the rising number of encephalitis patients.

The decision came after Chief Minister Nitish Kumar passed instructions to convert the prisoners' ward into ICU for children to meet the crisis of beds.

Questions were raised over the lack of facilities in the hospital after three to four Acute Encephalitis Syndrome (AES) affected children were being treated on a single bed.

Arrangements are being made on a war footing by the hospital management to accommodate patients in the new ward as soon as possible.

Manager of SKMCH, Sanjay Kumar Shah, told ANI, "We have converted this ward into an ICU and shifted the prisoners' ward. We have done this to accommodate more children. At least 19 more beds will be added here, which will increase the capacity. All the necessary arrangements are being done. This ward will become functional shortly."

Meanwhile, the death toll due to encephalitis touched 117 on Thursday morning in Muzaffarpur district.

As per official data, a total of 98 deaths were reported at SKMCH, while 19 children died at Kejriwal hospital in the district due to the vector-borne disease till 8 am today.

Chief Minister Nitish Kumar on Tuesday visited SKMCH to take stock of the situation. Earlier, Kumar had announced an ex gratia compensation of Rs 4 lakh each to the families of the children who died due to AES.

He had also given directions to the health department, district administration and doctors to take necessary measures for the containment of the disease.

Earlier Union Health Minister Harsh Vardhan had visited the state to take stock of the situation and review measures taken in the wake of the outbreak.

The AES is a viral disease that causes flu-like symptoms such as high fever, vomiting and in extreme cases, brain dysfunction, seizure and inflammation of heart and kidney.