India   All India  20 Jun 2018  Chief Economic Advisor to return to US for family commitments, says Arun Jaitley
India, All India

Chief Economic Advisor to return to US for family commitments, says Arun Jaitley

Arvind Subramanian joined as Chief Economic Advisor on October 16,2014 for a period of three years, which was extended. 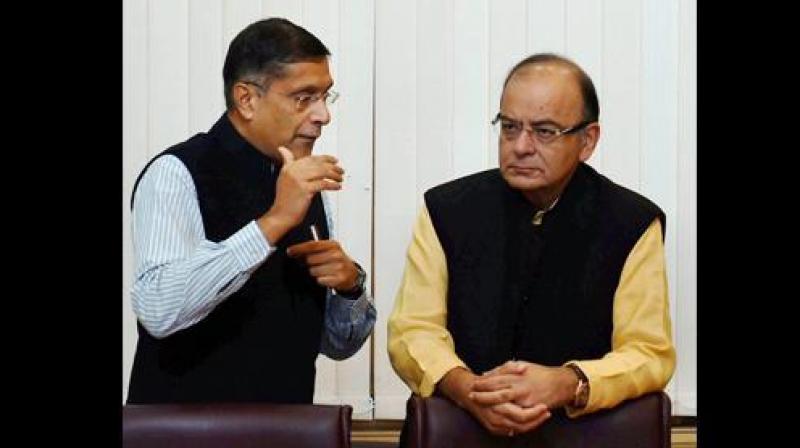 “He would like to go back to the United States on account of pressing family commitments. His reasons were personal but extremely important for him. He left me with no option but to agree with him,” Jaitley said in a Facebook post.

Arvind Subramanian joined as the Chief Economic Advisor on October 16, 2014 for a period of three years, which was extended after Jaitley requested him to continue for some more time.

In his Facebook post, the Union Minister said he will personally miss Arvind Subramanian's dynamism, energy, intellectual ability and ideas.

"He would walk into my room – at times several times a day, addressing me as “Minister” to give either the good news or otherwise. Needless to say his departure will be missed by me. But I know that his heart is very much here. I am sure he will keep sending advice and analysis wherever he is," Jaitley added.

Jaitley also credited Subramanian for conceptualising "JAM (Jan Dhan, Aadhar, Mobile) as a data base for availing public benefits." He said that Subramanian’s interaction with the government, Prime Minister’s Office (PMO) and with other Departments was both formal and informal and his instantaneous communications with interlocutors had increased his effectiveness.

"Profoundly grateful and humbled by these extraordinarily generous words by Minister Arun Jaitley announcing my decision to return-for personal reasons-to researching and writing. CEA job most rewarding, fulfilling, exciting I have ever had," he tweeted.

Profoundly grateful & humbled by these extraordinarily generous words by Minister @arunjaitley announcing my decision to return-for personal reasons-to researching & writing. CEA job most rewarding, fulfilling, exciting I have ever had. Many many to thank:https://t.co/kwsRqDrMTB

Arvind Subramanian, 59, a senior Fellow at the Peterson Institute for International Economics, took over as the Chief Economic Advisor in 2014 when his predecessor Raghuram Rajan became the RBI (Reserve Bank of India) Governor.

Subramanian did his graduation in Economics from Delhi’s St Stephens College and got an MBA from the Indian Institute of Management (IIM)-Ahmedabad. He received his doctorate from the Oxford University, UK.