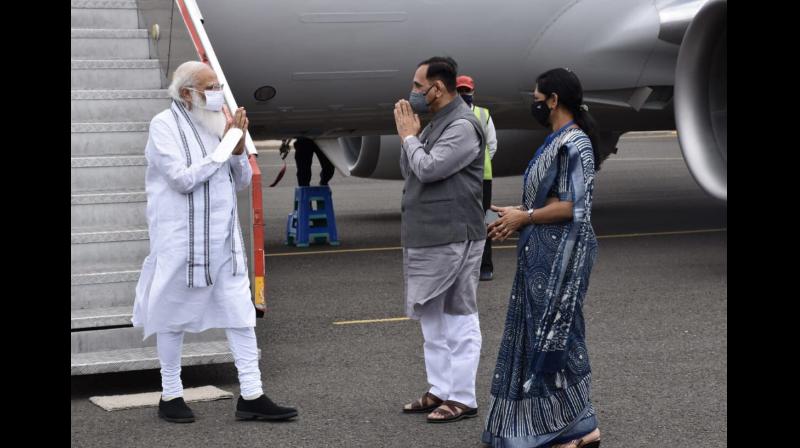 The Prime Minister landed at Bhavnagar from Delhi around noon and boarded a helicopter for a survey of cyclone- affected areas in Gir-Somnath, Bhavnagar and Amreli districts of Gujarat along with Diu. He was accompanied by chief minister Rupani. — Twitter

Ahmedabad/Mumbai: In Gujarat, as many as 46 people have been killed due to Cyclone Tauktae across 12 districts, and in Maharashtra at least 26 personnel on board accommodation barge P305 that went adrift in the cyclone fury before sinking in the Arabian Sea off Mumbai coast are dead and 49 still missing, officials said Wednesday.

To assess the damage and destruction wrecked by Cyclone Tauktae, Prime Minister Narendra Modi on Wednesday conducted an aerial survey of areas affected in Gujarat and adjoining Union Territory of Diu and  announced an assistance of ₹ 1,000 crore for immediate relief work in Gujarat.

"Undertook an aerial survey over parts of Gujarat and Diu to assess the situation in the wake of Cyclone Tauktae. Central government is working closely with all the states affected by the cyclone,” Mr Modi tweeted afterwards.

The Nationalist Congress Party (NCP) questioned why the Prime Minister did not visit cyclone-hit areas in Maharashtra.

Navy warship INS Kochi reached Mumbai on Wednesday carrying 22 bodies and 125 of the 186 rescues from P305.

"Today PM Modiji is taking an ariel survey of #CycloneTauktae affected areas of Daman, Diu and Gujarat. Why not the same of the areas affected in #Maharashtra? Is this not clear cut discrimination?" Maharashtra minister and NCP's national spokesperson Nawab Malik asked in a Twitter post.

In Gujarat, 24 deaths were reported due to wall collapses during the cyclone, while six died after trees fell on them. Five each died because of house collapse and electrocution, four due to roof collapse and rest died due to a tower collapse, an official said.

From Amreli district in Gujarat’s Saurashtra region, the worst affected in the cyclone that crossed the state coast as an extremely severe cyclonic storm on Monday night and completed landfall around 1.30 am Tuesday, 15 deaths were reported from.

In Maharashtra, a Navy spokesperson said the bodies were brought to Mumbai along with 125 of the barge P305 survivors. Forty-nine people who were on barge P305 which sank on Monday are still missing.

Calling the victims “Brave Nature's Victims (BNV)”, he said Navy personnel, battling extreme weather, have so far rescued 186 of the 261 people who were onboard barge P305 and also two from tugboat Varaprada. "Search and rescue operations are still on and we haven't lost hopes of bringing them ashore," he said. However, the chance of finding survivors is getting bleaker as the hours pass by, he added.

PM Modi, after conducting an aerial survey of affected areas in Gujarat and Diu, held a meeting with the state’s top officials to review the situation. Gujarat chief minister Vijay Rupani, state Chief Secretary Anil Mukim and additional chief secretary (Revenue) Pankaj Kumar were among those who attended the meeting held at GUJSAIL Complex at Ahmedabad Airport, officials said.

The Prime Minister landed at Bhavnagar from Delhi around noon and boarded a helicopter for a survey of cyclone- affected areas in Gir-Somnath, Bhavnagar and Amreli districts of Gujarat along with Diu. He was accompanied by chief minister Rupani.

The cyclone made landfall between Diu and Una town of Gir-Somnath district in Gujarat on Monday night. Before making landfall in Gujarat, Cyclone Tauktae had claimed seven lives and caused damages in parts of Maharashtra, particularly in its coastal areas.

The cyclone, categorised as an extremely severe cyclonic storm on Monday, has now weakened into a depression and lay centred over south Rajasthan and adjoining Gujarat region on Wednesday morning, the India Meteorological Department said. — Agencies