India   All India  20 May 2020  Virus in India diverging from the one originated in Wuhan, scientists say
India, All India

Virus in India diverging from the one originated in Wuhan, scientists say 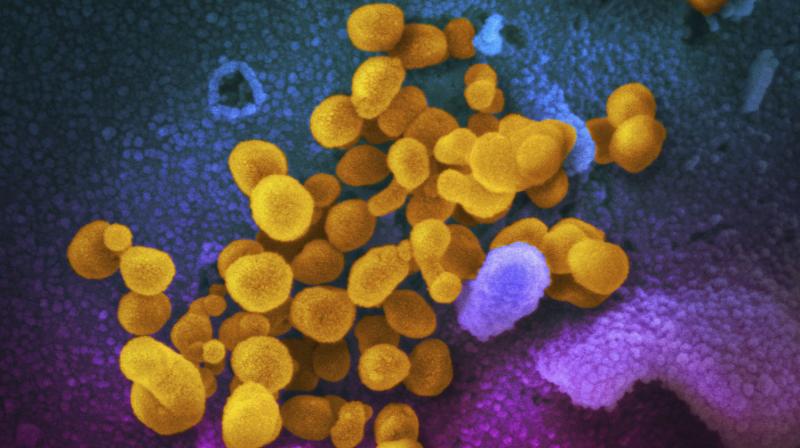 Electron microscope image made available by the U.S. National Institutes of Health in February 2020 shows the Novel Coronavirus SARS-CoV-2, yellow, emerging from the surface of cells, blue/pink, cultured in the lab. (AP)

Hyderabad: A group of Indian scientists who have been working on understanding changes happening to the Coronavirus that causes Covid-19 has found that some structures of the virus are undergoing changes that show that the virus, in India, is diverging from the Wuhan strain.

Scientists also cautioned that the overall low testing rate in the country and a smaller number of genome submissions are emerging as major bottlenecks in the assessment of the evolution of SARS-CoV-2 in India.

According to Dr Syed E Hasnain, vice-chancellor of Jamia Hamdard and a former head of the city-based Centre for DNA Fingerprinting and Diagnostics, the group studied approximately 4,000 SARS-CoV-2 sequences available in public databases, including strains sequenced in India.

“Other studies focused majorly on the genomic aspect of the virus. Our study evaluated both genomic as well as functional aspects of the virus in the Indian and global scenario. Large-scale analysis revealed significant changes in some proteins of the virus. We also focused on conserved proteins that can be targeted as potential diagnostic and intervention candidates,” Dr Hasnanin said.

The study by Jamia Hamdard, a deemed to be University in New Delhi, the United Kingdom-based BioInception Labs Pvt Ltd., an R&D company focused on drug discovery and diagnostics, and Hyderabad based Envirozyme Biotech Pvt Ltd. (India), an applied R&D biotech company, started looking at possible reasons why India, having the second largest population in the world, reported just 2 per cent cases and 0.9 per cent mortalities of the worldwide cases of Covid-19.

While global death average is 40 deaths per million, as on May 17, in India it was 2 per million. “We began investigating possible reasons for this,” Dr Hasnain said.

Dr Hasnain explained that open reading frames (ORF) are responsible for protein production in an organism. SARS-CoV-2 has 12 ORFs and based on the mutational analysis of these ORFs, they found that their data suggests crucial mutations in Indian isolates, which may affect infectivity of SARS-CoV-2 in the Indian population. The Indian samples of the virus revealed that they were closer to the virus variations in China, Kuwait, Spain, Norway and Canada, indicating that these strains travelled from these countries into India.He said their study indicated that delayed restrictions enforced by India could have resulted in the different strains of virus coming into India, particularly from European hotspot regions.

“More such studies are required to understand the pathogen’s outbreak dynamics, which will eventually lead to mitigation of the disease. The low sampling rate and a smaller number of genome submissions are major bottlenecks in assessing evolution of SARS-CoV-2 in India. We hope the government will work to increase the sampling rate as well as genomic submissions for further studies,” he said.