India   All India  20 May 2020  Guest workers choose to walk back home as trains to cyclone-hit areas cancelled
India, All India

1,500 stranded in Bengaluru as trains to Odisha, West Bengal are cancelled 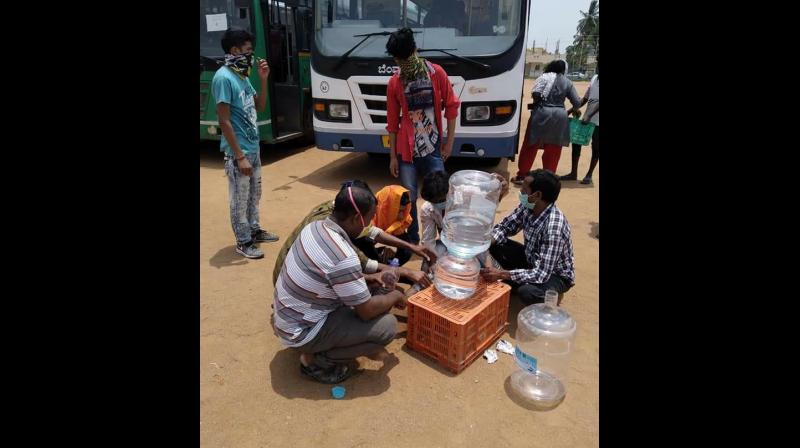 Bengaluru: While the state government wants to present the guest workers travel process as smooth, the ground reality is confusion and lack of transparency continue to affect them.

In the radiant heat, some have chosen not to wait for the trains and take the road to walk thousands of kilometres to Bihar, Jharkhand and Uttar Pradesh.

Though Bruhat Bengaluru Mahanagare Palike has made an arrangement for migrants at the Bangalore International Exhibition Centre (BIEC), the influx is so huge that even though a train leaves with the workers, the vacant space gets immediately filled up.

However, at one instance, it was found that while the BBMP Marshalls brought 31 workers from the border since they were walking to Jharkhand, the police did not allow the workers into the BIEC for the next two days.

Advocate Clifton Rozario, who is the national secretary of the All India Central Council of Trade Unions (AICCTU) and has been working with migrant workers in Karnataka, stated that the number of migrant workers forced on to the roads is ever increasing in Bengaluru.

He advocated for the use of more shelters and free run of trains to tackle the unprecedented situation.

Fifteen migrants from Jharkhand have been living on the footpath opposite Thirumalashettyhalli police station for the last 15 days with all necessary
paperwork. There has not been any arrangement of a train yet.

1,500 stranded as trains to the cyclone hit areas of Odisha and Bengal cancelled

There are around 1,500 guest workers from Odisha and Bengal stranded in Whitefield because the trains to these places have been cancelled in the wake of Cyclone Amphan.

Zibi Jamal of Whitefield Rising, a citizen group, has been assisting the workers at the police station to fill forms.

"People are sleeping at the vegetable market are waiting for the ticket in Varthur.  They are told to fill up the form online after which they will receive an SMS when the train is ready. Easy to say. Execution on ground is a different matter altogether. Many do not have mobile phones. They share one in fact. Filling up online costs Rs 300/form. A ride from one place to the other is 3x the charge. The people bearing the brunt of lockdown, are being looted as well," she narrated the trauma of migrants.

"Hum kab ghar jayenge" (When will we go home) is the most spoken word at Sarjapura nowadays.

According to the Voice of Sarjapura, which has been assisting the policemen to pave way for the smooth departure of guest workers, more than 3000 entries have been made at Sarjapura police station, but less that 500 have been sent home.

In the wee hours, nine buses carrying 250 migrants left Sarjapura to the city Railway station. Most of the labourers are clueless on how to get into the bus that drops them to railway station. Some have been asked to leave their work site and are now homeless. They have been staying up at the School grounds of SVP till the time they can reach their native place.

"Though it seemed like a relief, the train to Assam was cancelled and 150 people are now stuck at the railway station. This is the nation's and government's biggest failure. Money has been collected at every juncture from these migrants, but provisions have been made as if it is charity," a member of the Voice of Sarjapura lamented