Earlier on April 16, Rajbhar had announced that his party will go 'solo' in the ensuing Lok Sabha polls. 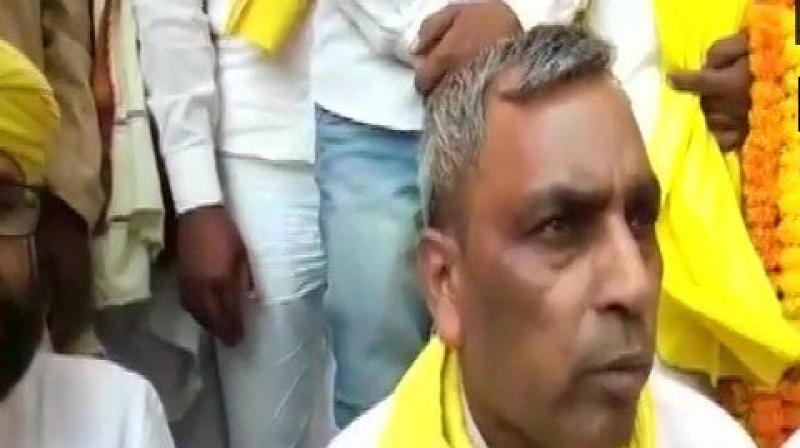 Rajbhar, a minister for backward class welfare and 'divyangjan' empowerment had earlier resigned from the cabinet but his resignation was not accepted. (Photo: ANI)

Rajbhar, a minister for backward class welfare and 'divyangjan' empowerment had earlier resigned from the cabinet but his resignation was not accepted.

Informing about the same, office of Chief Minister, Uttar Pradesh tweeted, "Today UP CM Yogi Adityanath has written a letter to Governor and have requested him for immediate dismissal of Backward Welfare Minister Om Prakash Rajbhar from the cabinet."

Rajbhar who is also the chief of Suheldev Bharatiya Samaj Party (SBSP), had on May 1 stated that he has resigned as a cabinet minister from Uttar Pradesh Chief Minister Yogi Adityanath government over the seat-sharing agreement with the BJP.

"I had resigned on the night of April 13 from the post of state minister when they (BJP) said that you have to contest on our symbol. I told them I will contest from only one seat but from my own party. However, they did not agree to that either. Following which, I immediately resigned but they did not accept my resignation," said OP Rajbhar while speaking to media persons here.

Earlier on April 16, Rajbhar had announced that his party will go 'solo' in the ensuing Lok Sabha polls. He had alleged that the BJP wanted to "eliminate" the SBSP as it did not give them a single ticket.