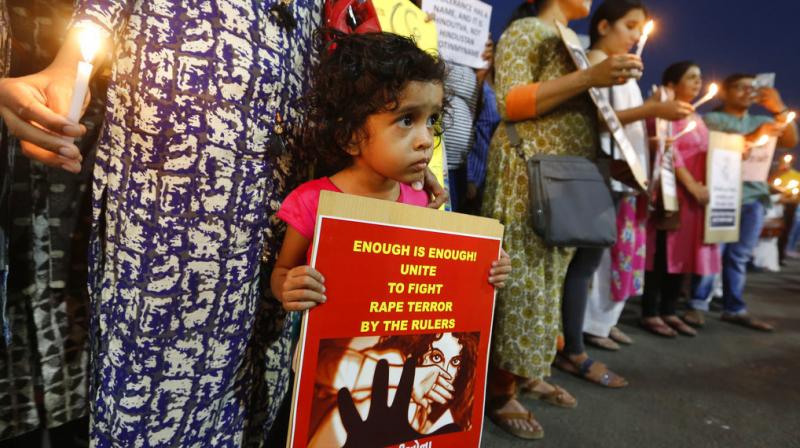 Srinagar: The signature of Vishal Jangotra, an accused in the rape and murder of an eight-year-old girl in Kathua in January, does not match the one which he claimed to have signed in an exam attendance sheet in Meerut to claim he was not at the crime scene, according to a report of forensic experts.

The report by the Central Forensic Sciences Laboratory (CFSL), detailing this conclusion, has been submitted to the crime branch of Jammu and Kashmir police, according to officials in the probe team.

The crime branch, meanwhile, issued notices to all the three friends of Vishal for appearing before it for questioning on Monday after the Supreme Court gave a go ahead on May 17 for their further examination.

The officials said the report has stated that Vishal had not put the signature on the attendance sheet and it was done by someone else.

Vishal, one of the eight accused arrested in the case for raping and murdering the girl from the minority nomadic community, had claimed that he was in Meerut and had never visited Kathua when the crime was committed. He had also told the investigators that he had signed the attendance sheet before the examination on January 15.

The crime branch had sent the attendance sheet to CFSL for having an opinion as the probe indicated that the signatures appeared to have been made by some friend of Vishal as his train from Jammu to Meerut was late and he had reached Meerut after the examination was over, officials said.

The "Questioner of Examined Documents" (QED), who is an expert on examination of handwriting samples, opined that the signatures on the attendance sheet did not match with that of Vishal, son of Sanji Ram, the alleged mastermind of the murder, the officials said.

The crime branch has already expanded its investigations into the gang rape and murder case to nail the people who had signed an attendance register on behalf of Vishal at the Meerut college.

Police wanted to again question his three friends -- Sachin, Neeraj and Sahil -- but they had approached the Supreme Court earlier in May alleging harassment by the crime branch.

The apex court on May 17 refused to come to their rescue and directed them to appear before the crime branch but said in its order that "a relative of each of the witnesses shall be allowed to accompany him, but the said relative shall not enter into the investigation room. However, he shall remain at a reasonably visible distance.

While making this concession, the apex court made it clear that these directions "should not remotely be inferred that there is any kind of harassment by the investigating agency".

The officials said that the three would be questioned on Monday and all the directions of the apex court would be adhered to.

The officials suspected that someone from the university had allowed Vishal to write his answer sheet after the examination was over on January 15 as his train had reached late from Jammu. The officials also alleged that the accused had deliberately visited an ATM and was seen looking at the camera to create an alibi for himself.

In its charge sheet, the crime branch had mentioned that some officials of the university had allegedly received "huge amount at kickback from accused Sanji Ram".

Vishal is among eight people who have been charge sheeted by the crime branch in the rape and murder of the girl. The charge sheet also claimed that Sanji Ram, who has been termed as the main conspirator, had planned the kidnapping of the girl only to drive away nomads from the Kathua region.

The crime branch has alleged in the charge sheet that Vishal had tried to create an alibi of his absence from the crime scene by allegedly "resorting to manipulation of records and creation of false evidence with the connivance and assistance of his father Sanji Ram".

Vishal, who is pursuing his bachelor of agriculture course from a college in Meerut, has been charged by the crime branch of raping and helping in the murder of the minor girl along with a juvenile (main accused and a relative of Sanji Ram) and special police officer Deepak Khajuria alias Deepu.

The juvenile, whose bail plea has been rejected by the concerned court in April, is the main accused in kidnapping and sexually assaulting the girl.

The crime branch had put its investigations on hold and was awaiting an order of Supreme Court which had been petitioned by the victim's side for shifting the trial from Kathua and the accused side pleading for handing over the investigation to the CBI.

In its May 7 order, the apex court said "the pivotal fact around which the controversy centtres is the abduction, rape and murder of an eight year old girl.

An FIR was lodged at Hiranagar Police Station, Kathua.

The investigating agency, namely, the Crime Branch, which took over the investigation on January 22, 2018 from the local police has already filed the charge sheet on April, 9 in the court of Chief Judicial Magistrate, Kathua in the state of Jammu and Kashmir.

However, the court did not say anything about handing over the case to the CBI and transferred the case to District and Sessions judge at Pathankot in Punjab, 30 km from Kathua.