Without naming Pakistan, Modi said that the neighbour which has been inciting the youth of Kashmir for violence is itself disintegrating. 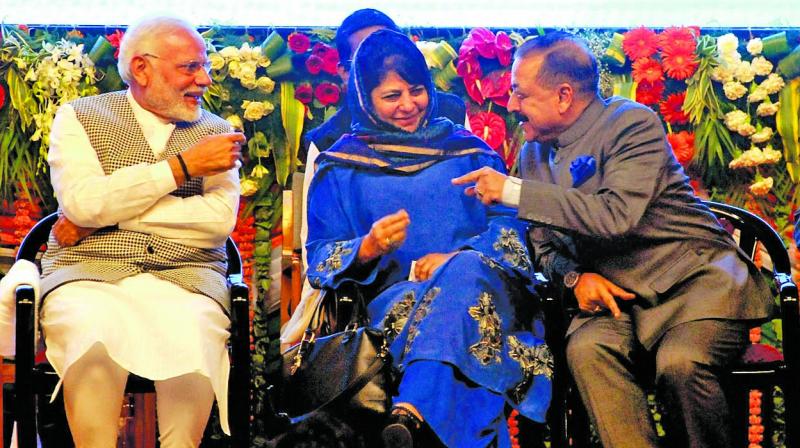 Srinagar: Prime Minister Narendra Modi on Saturday made a fervent appeal to the Kashmiri youth who have joined the militant ranks or indulge in stone-pelting to shun the path of violence, return to their homes to live a life of “dignity and peace” and be part of the endeavor of creating a “new India” by 2022.

“It is time that these youth return to their families. Each stone thrown by a misguided youth hurts the hearts and minds of the people in Jammu and Kashmir,” he said reiterating that vikas (development) is the solution to all problems faced by the state and its people.

Speaking for the first time after the government announced an halt to anti-militancy operations in the state during the holy month of Ramazan, the Prime Minister said there is no alternative to peace and stability.

Without naming Pakistan, he said that the neighbour which has been inciting the youth of Kashmir for violence is itself disintegrating. “We belong to one nation for thousands of years. Nobody can create a wedge between us. Those who have been trying to create problem are reaching their end,” he said.

Dedicating the 330-MW Krishenganga power project to the nation, Mr Modi said that declaring unilateral ceasefire and halting military operations against militants in the state was aimed at not only to provide an opportunity to the people to observe the Muslim fasting month of Ramazan in a peaceful atmosphere but also to expose the elements which are misusing the name of Islam to push the youth of the Valley towards violence and terrorism.

He said earlier the police cases against thousands of the youth involved in stone-pelting incidents were withdrawn.

The Prime Minister said that the PDP-BJP government in J&K and the NDA government at the Centre are working hard to get youth of Kashmir back to the road of development. “The youth of J&K have to play the major role for the development of the state. This state has every facility to move forward, you should not lag behind. But there are some powers which don’t want to see the state on the path of progress. We have taken a pledge to defeat them,” he said.

He said it is his own homeland which is damaged by each stone or a gun taken into his hands by a local youth. “But time has come when the youth of J&K have to shun violence and be part of the development of their nation. They have to connect with the development of India and contribute in the endeavour of making of new India,” he said.

Mr Modi reiterated that the problems in Kashmir can only be solved by embracing its people. Recalling his last Independence speech, Mr Modi said he stood by what he had said earlier that “Na goli se, na gaali se, Kashmir ki samasya suljhe gi gale lagaane se (Kashmir problem will not be solved by bullets or abuses but only with embracing the people)”.

The Prime Minister said that the then Prime Minister Ataj Behari Vajpayee had all praise for Kashmiriyat (the ethno-national and social consciousness and cultural values of Kashmiri people). “He was supporter of ‘Kashmiriyat’ and I’m mureed (disciple) of it,” he said.

He said that while the government is leaving no stone unturned to solve the problems of the people of J&K especially its youth, he needs the help from the latter, their parents, saints and all the residents of the state to save both “Kashmiriyat” and “Jamhooriyat”.

Earlier, beginning his speech in Kashmiri, Mr Modi asked people in Srinagar to accept his “salaam” and wished them health and prosperity. He spoke passionately for about 30 minutes highlighting the importance of “Kashmiriyat”.

Mr Modi is on a one-day visit to the state’s three regions — Leh, Kashmir and Jammu. In Leh, he launched the construction of Zojila tunnel to provide all-weather connectivity to Ladakh.