BSY quits as CM before floor test, gov invites HDK, oath on May 23

Huge blow to BJP as it fails to get K’taka numbers; Cong to join JD(S)-led govt. 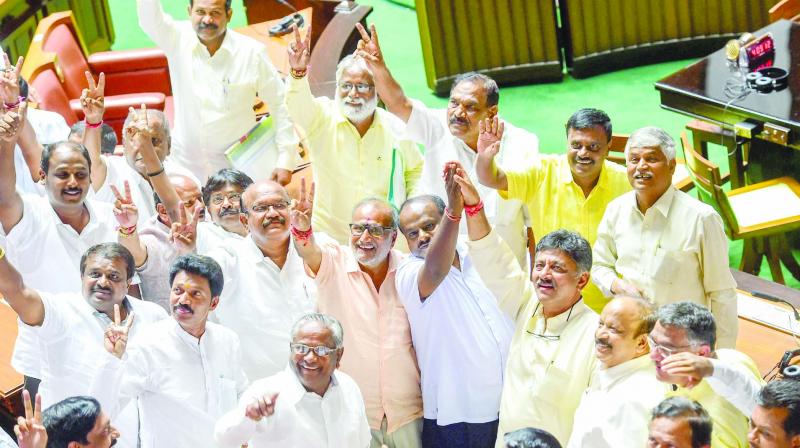 Bengaluru: The three-day-old BJP government in Karnataka collapsed on Saturday as chief minister B.S. Yeddyurappa quit minutes before he was to face a floor test to prove his contested majority in the hung Assembly, after which the JD(S)-Congress combine led by the regional party’s chief H.D. Kumaraswamy was invited to take the reins of power.

Capping five days of riveting political and courtroom drama, Mr Yeddyurappa announced his decision to quit on the floor of the Assembly after a brief emotional speech rather than face a vote of confidence he was widely expected to lose.

Before leaving for Raj Bhavan to hand in his resignation at the end of what was one of the shortest tenures of any government, Mr Yeddyurappa announced in the House on Saturday that he would not rest until the BJP won 28 Lok Sabha seats in the 2019 general election and 150 seats in the next Assembly polls, which he predicted could happen anytime.

“I am in good health and will fight to bring back a full-fledged BJP government in Karnataka. I will tour the state and we will win 150 seats in the next Assembly elections, which may happen anytime,” he declared.

While he did not attempt to prove his majority on the floor of the House through a trust vote, Mr Yeddyurappa said he was sure of getting the “conscience” votes of the Opposition MLAs, and a few had even promised him to vote in favour of his government. But, he claimed, the Congress had terrorised its MLAs and locked them in a room. “You (Congress) did not trust your own MLAs and did not even allow them to speak to their families. Today I can see relief on Congress MLAs’ faces,” he said.

The 75-year-old Lingayat strongman headed straight to Raj Bhavan, where he handed over his resignation to governor Vajubhai Vala a day after he was ordered by the Supreme Court to face a floor test at 4 pm Saturday after it drastically reduced the 15-day deadline set by the governor for him to prove his majority.

Three hours later, JD(S) leader H.D. Kumaraswamy, 58, drove to Raj Bhavan for a meeting with the governor. Mr Kumaraswamy, the youngest son of JD(S) supremo H.D. Deve Gowda, said the JD(S)-Congress combine has been invited by the governor to form the new government and given 15 days to prove his strength on the floor of the Assembly.

The JD (S) leader told the media here that he was set to take oath between noon and 1.05 pm on Monday, however, he put off the swearing-in function to Wednesday as Monday marks the death anniversary of Prime Minister Rajiv Gandhi, and both Mrs Sonia Gandhi and Congress president Rahul Gandhi would not be able to make it to the function on that day. Other top leaders of the Opposition who were invited include BSP supremo Mayawati and West Bengal chief minister Mamata Banerjee. 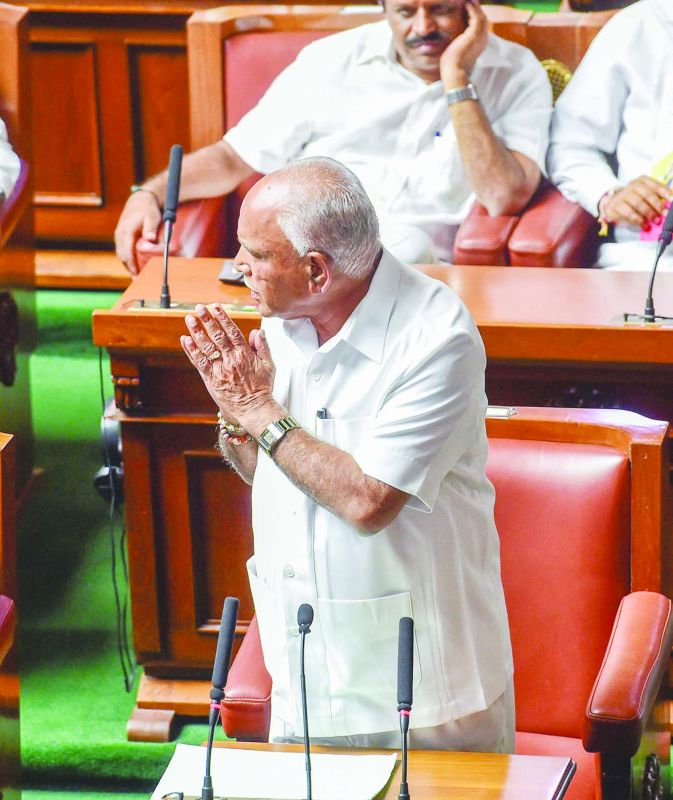 Speaking to reporters after the meeting on Saturday night, Mr Kumaraswamy, who became the chief minister for the first time in 2006 at the head of a JD(S)-BJP coalition, said the governor has given him 15 days to prove the majority, “but we will do it much before”. He also thanked the Supreme Court for the “right directions”.

Mr Yeddyurappa, recalling his political struggle since the days when the BJP had merely two MLAs in the House, reiterated that he would work for the people and his party till his last breath. “Ever since the party named me its chief ministerial candidate, I toured the state and connected with the people through the Parivarthana Yatra. And they gave us 104 seats, while rejecting the Congress and JD(S). But both parties have come together to form an unholy alliance,” he said, and added: “If I were to continue in the chief minister’s post, it would be a different scene altogether for the state with development work being carried out on a war footing through greater financial assistance from the Narendra  Modi government at the Centre, making Karnataka a model state of the country.”

Taking a potshot at Congress-JD(S) CM candidate, Mr Kumaraswamy, without naming him, Mr Yeddyurappa recalled that some leaders had said during the campaign that they would die if they were not elected to power. “But I will not die for power, I will die for my people, because they are the masters in a democracy. I will put in my papers due to a conspiracy of the Congress Party,” he said before leaving the Assembly, shaking the hands of the Opposition and his own party’s leaders.

The incoming CM, Mr Kumaraswamy, said soon after he forms the government, a coordination committee comprising Rahul Gandhi, Ghulam Nabi Azad, K.C. Venugopal and Mallikarjun Kharge would be formed to ensure the smooth functioning of the government.

Expressing confidence that the coalition government would complete its full five-year term, he said he would not allow the BJP to indulge in horse-trading of legislators. “We know that the BJP will still try to break the coalition by poaching legislators. We will not allow that to happen at any cost. Besides, JD(S) and Congress leaders will hold a meeting on Saturday night to finalise the list of names for the ministry. The administration would be monitored by the coordination committee, Mr Kumaraswamy said.