India   All India  20 May 2017  Services split under Goods and Services Tax, to have four rates
India, All India

Services split under Goods and Services Tax, to have four rates

The GST Council will meet on June 3 to decide the tax rate for gold and other remaining items. 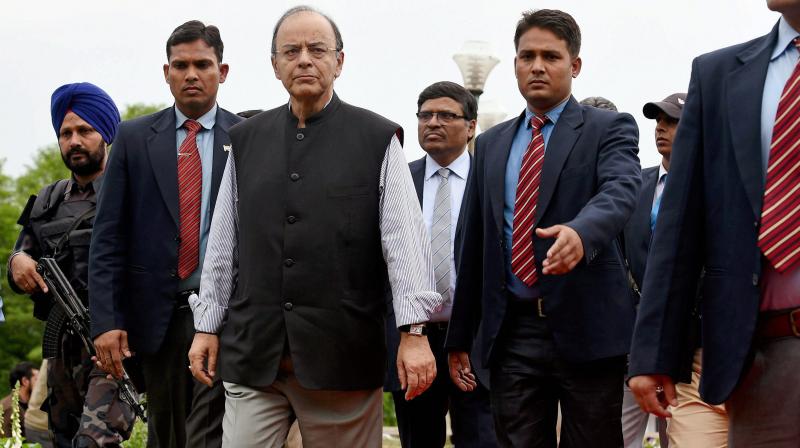 New Delhi: India on Friday announced four tax slabs for services such as telecoms, insurance and restaurants under the Goods and Services Tax (GST), going back on the promise to keep the new indirect tax regime simple.

The GST Council, a federal body of the Centre and states, announced rates of five, 12, 18 and 28 per cent for services, in line with those applying to goods. It is a big departure from the current regime, where most services are taxed at 15 per cent including cess.

The move, experts said, could complicate compliance and leave businesses at the mercy of an intrusive tax bureaucracy. Services account for more than half of India’s $2 trillion economy.

The GST Council, however, decided to exempt healthcare, education, travel by Metro and local trains, besides religious travel and haj yatra from GST, which is set for a July 1 rollout.

The lowest five per cent slab will be imposed on transport services such AC train travel, goods transport and economy air travel (against six per cent currently), among others. 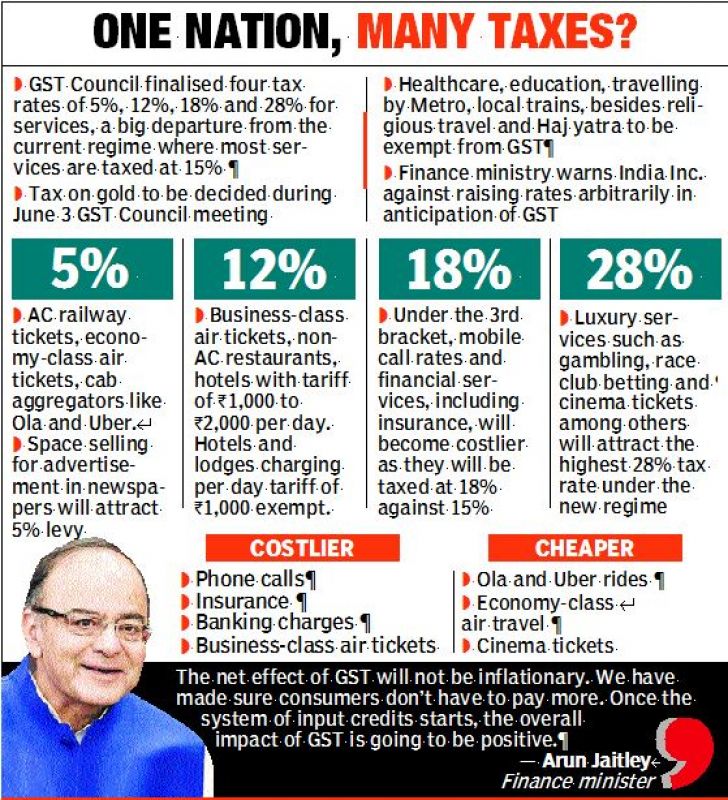 Cab aggregators such Ola and Uber will also come under transport services and will be taxed at five per cent against the current six per cent. These products have been kept under the lowest tax slab as the main input for the sector, petroleum products, will not come under the GST, and therefore, will not get any input tax credit.

Mobile call rates and financial services, including insurance, will become costlier as they will be taxed at 18 per cent as against 15 per cent currently.

Luxury services such as gambling, race club betting and cinema tickets, among others, will attract the highest 28 per cent tax rate.

Revenue secretary Hashmukh Adhia insisted that the tax incidence on telecom services will be unchanged at 15 per cent after the input credit is taken on equipment.

Finance minister Arun Jaitley played down concerns and said, “The net effect of GST will not be inflationary. We have made sure consumers don’t have to pay more. Once the system of input credits starts, the actual incidence is going to be positively impacted,” said.

The GST was supposed to usher one tax regime in the country, but political compulsion of striking a compromise between the Centre and states has resulted in a complex tax structure for both goods and services. “Multiplicity of tax rates for services will add complexity to compliance under the GST regime,” said Mr Menon.

The rate for hotels with tariff of Rs 1,000 to Rs 2,000 per day would be 12 per cent, while those with tariff of Rs 2,500 to Rs 5,000 would be taxed at 18 per cent. Five-star hotels and restaurants in these hotels will attract 28 per cent tax.  The GST Council will meet on June 3 to decide the tax rate for gold and other remaining items.

E-commerce players like Flipkart and Snapdeal will have to deduct one per cent TCS (tax collected at source) while making payments to suppliers. Space-selling for advertisements in newspapers will attract five per cent levy in GST. It is exempted from tax currently.

The rate of 12 per cent GST on contract services is expected to give momentum to real estate recovery as today, both service tax and VAT are levied on 110 per cent of the consideration.