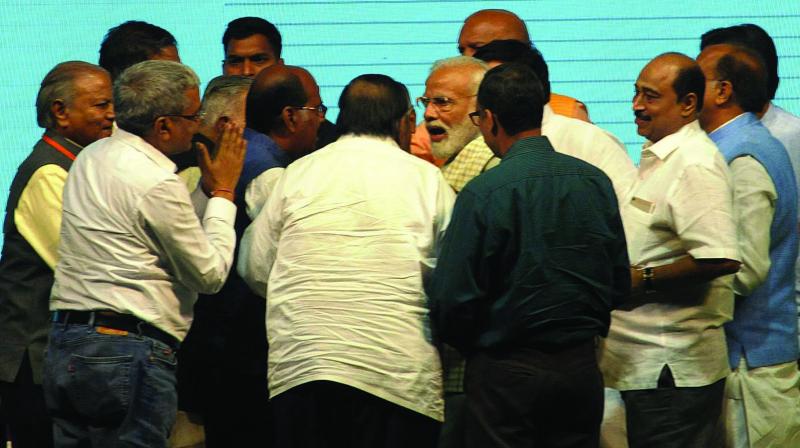 New Delhi: Prime Minister Narendra Modi on Friday promised traders Rs 50-lakh loan without any collateral, credit card facility and a pension scheme for small shopkeepers as he made a strong re-election pitch to the business community.

Modi said while his government has stood by traders in thick and thin, the Opposition Congress has abused businessmen by calling all of them “chor” (thieves).

Addressing a traders' convention here, he said the BJP-led NDA government in the last five years at the Centre worked to simplify lives and businesses of traders by scraping 1,500 archaic laws, simplifying processes and providing easy credit.

Traders are "backbone" of the Indian economy but had in past never got the respect they deserved, Modi said, adding that doubling the size of the economy to $5 trillion is not possible without their contribution.

"I am impressed by the hard work of traders... their business has helped the economy bloom," he said. "I have tried to make your life and business easy in last five years."

"The country is also seeing how we have stood by you in thick and thin," Modi said.

With a household audience, the Prime Minister said the trading community is like weather forecaster who can anticipate future tidings.

Hitting out at the opposition Congress, the prime minister said the party has in its 70-year rule only "insulted" businessmen. "They called all businessmen chor (thieves)" without realising the contribution of the business community in the economy.

Stating that Mahatma Gandhi too came from businessmen community of banias, he said the country has seen the "insults" meted out by the Congress to traders.

After being re-elected, he said, his government will set up a National Traders' Welfare Board, bring trader credit cards and a pension scheme for small shopkeepers. Also, the provision will be made to provide loans of up to Rs 50 lakh without collateral, the prime minister promised to traders.

Congress-led governments blamed traders for ills like price rise when it was the party's own hoarders who were black marketing commodities, he alleged.

Listing his government's achievements, he said the NDA regime has ended 1,500 archaic laws at the rate of one per day in the last five years to make doing business easier in the country.

"I consider you (traders) as biggest stakeholder of the economy. Opposition parties remember you only on special occasion," he said.

Modi said the Goods and Services Tax, which was brought in July 2017 by amalgamating 17 different central and state taxes, has made doing business transparent, ended state check-posts and resulted in doubling of registered traders.

"I do not say there may have not been mistakes (in implementing GST) but we have quickly addressed any anomalies based on suggestions from traders," he said.

Based on suggestions of traders, most daily use items are taxed at zero rate while 98 per cent of the commodities are taxed at less than 18 per cent, he said adding the process of filing tax returns under GST has also been simplified and exemption limit for small businesses doubled.