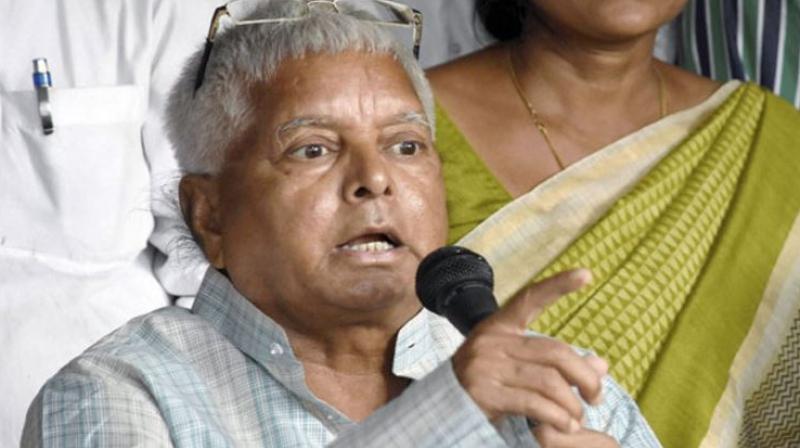 JD(U) leader Neeraj Kumar, who has written a letter to the EC, said, “We want to know whether Lalu Yadav took the court’s permission to distribute symbols with his signature”.

As per the seat-sharing formula in the grand alliance, the RJD has given tickets to 19 candidates in Bihar. RJD leaders in Patna said that the party’s parliamentary board had authorised Mr Yadav to take final decisions on the selection of candidates and seats for the Lok Sabha elections.

Mr Yadav has been convicted in four fodder scam cases and is facing trial in two more. The fifth case, related to fraudulent withdrawal of `139.39 crore from the Doranda treasury, is still pending with the court.

Five fodder scam cases were shifted to Jharkhand after the separation of the state in 2001 while the trial in one case related to Bhagalpur treasury is going on in Patna CBI court.

The JD(U) also blamed Lalu Yadav of influencing Lok Sabha election through his social media activities. JD(U) spokesperson Neeraj Kumar said that “While being in judicial custody and currently recuperating in a Ranchi hospital he can meet only three persons in a week with court’s permission but he has been trying to influence elections through his activities which is a violation of jail manual and model code of conduct. RJD must come out with valid explanations about his social media activities”.

A few days earlier Bihar Chief Minister Nitish Kumar had charged his rival and RJD Chief Lalu Yadav of violating the jail manual by talking to political leaders over the phone from jail.

The move against RJD Chief Lalu Yadav has triggered sharp reactions in the grand alliance. The RJD, Congress and Hindustani Awam Morcha (HAM) jointly reacted against the JD(U) for seeking cancellation of nominations of RJD candidates.

“JD(U) is raising the issue after two phases of elections are over in Bihar. They know what is going to happen in rest of the phases that’s why they have started raising this signature issue”, RJD national Vice president Shivanand Tiwary said.