No lal batti on PM, President, VIP cars from May 1

Interestingly, information and broadcasting minister Venkaiah Naidu has never used a beacon light on his vehicles. 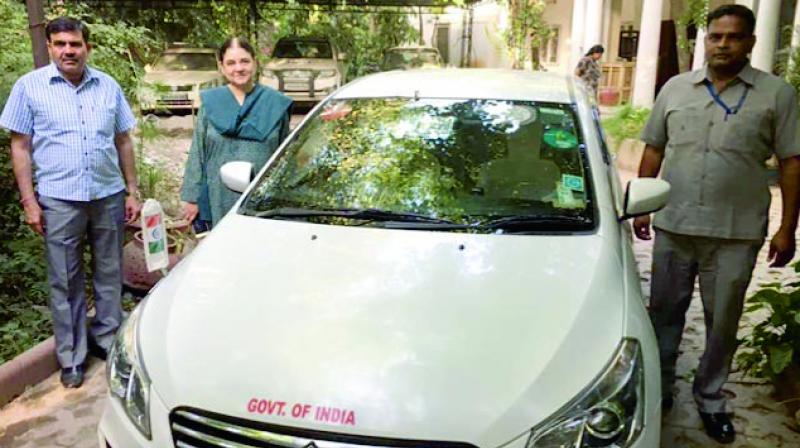 Hours after Centre’s decision on Wednesday to ban use of red beacons in cars of VIPs from May 1, Union minister Maneka Gandhi removed the symbol of power from her official vehicle. (Photo: Asian Age)

New Delhi: The government on Wednesday decided it was time for the “lal batti” culture to go for good, with the Union Cabinet clearing the proposal that red beacon lights will not be used by anybody May 1 onwards, including VVIPs like the Prime Minister, President and judges.

Only emergency vehicles — ambulances and fire brigades — have been allowed to use the blue beacon light.

Hours after presiding over the Cabinet meeting where the decision was taken, Prime Minister Narendra Modi tweeted, “Every Indian is special. Every Indian is a VIP.”

Responding to several praiseworthy tweets on the decision, he further tweeted, “It should have gone long ago. Glad that today a strong beginning has been made.”

Minutes after the Cabinet meeting, several Cabinet ministers, like women and child development minister Maneka Gandhi and road transport minister Nitin Gadkari, removed the red beacon light from their vehicles. In fact, junior minister Giriraj Singh could be seen in a video removing the beacon light from his vehicle personally amid applause from his staff and onlookers.

Interestingly, information and broadcasting minister Venkaiah Naidu has never used a beacon light on his vehicles.

Briefing media after the Cabinet meeting, finance minister Arun Jaitley said that the rule pertaining to use of red beacon lights — (Rule 108 [1] and [2]) — has been virtually scrapped from the Motor Vehicle Rules, 1989. Necessary amendments will be made to implement the decision, he said.

Official sources said that since only a rule has to be removed, it can be done through an executive order.

“After May 1, no one will be able to put red light atop his or her vehicle. Blue light will be used only for emergency vehicles in the country. Neither the states nor the Centre will have power to give any special permission (for use of beacon lights),” Mr Jaitley informed.

The finance minister added that the issue was deliberated upon on many occasions, and on Wednesday the Prime Minister took the decision and informed the Cabinet during the meeting.

“There will be no exception for anyone,” he added.

Agencies quoted Mr Gadkari as saying that the NDA government is a government of the masses and that’s why it has decided to abolish the VIP culture of beacon lights and sirens.

The decision, he said, was taken to strengthen “healthy democratic values” in the country.