India   All India  20 Apr 2017  Gave proof of food, did not get justice; will fight for soldiers: Tej Bahadur
India, All India

Gave proof of food, did not get justice; will fight for soldiers: Tej Bahadur

He received his dismissal orders on Wednesday and moved out of the cantonment with his belongings in a three-ton truck. 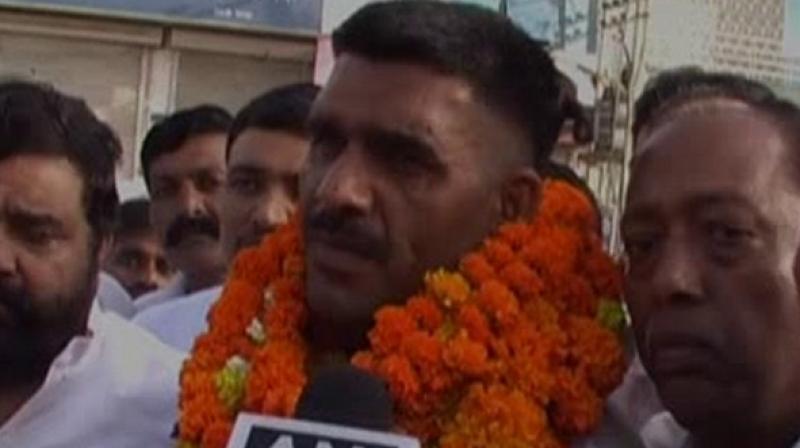 Rewari: A day after the Border Security Force (BSF) dismissed Tej Bahadur Yadav from the viral video of poor food conditions for the army, on Thursday said his fight is for all the soldiers, adding that he is confident of getting justice.

"I have given proof of the food but I did not get justice. I will go to the court. I am confident of getting justice. I will fight for the soldiers till my last breath. Complaints had come earlier as well but no one paid heed to that. It was my duty to reveal it to the government," Yadav said.

Yadav said he raised his voice so that the coming generation does not face the same situation in the army.

"The officials had kept me locked and I was not allowed to talk to my family. I was given my phone when I went to the court," he added.

A visibly disappointed Yadav earlier in the day requested the government to support him and asserted that if he did not get the support, he would move the judiciary.

Yadav on Wednesday said that he will move the High Court over the matter and seek justice.

Condemning the dismissal of Yadav, the Congress Party on Thursday said that the former should have been treated like a whistle blower, rather than being suspended.

"It is extremely unfortunate and regrettable. He was trying to expose the inadequacies in the entire nutrition system of the BSF. The superiors did not listen to him. He should have been treated as a whistle blower rather than being sacked," Congress spokesperson Manish Tewari said.

He received his dismissal orders on Wednesday and moved out of the cantonment with his belongings in a three-ton truck.

The Summary Security Force Court (SSFC) dismissed Yadav from service for posting a video regarding substandard food being served to the jawans.

Bahadur was found guilty of all the charges and awarded dismissal from service.

As per the BSF Act and Rules, he can now submit a petition or appeal against the punishment to the higher headquarters within three months.

During the proceedings, all opportunities were given to the individual for his defence.

Bhadur had earlier uploaded a video about quality of food in BSF which had gone viral on social media.

In the video that had sparked a nationwide outrage, Yadav, a BSF soldier of the 29 battalion Seema Suraksha Bal, was seen exposing the rot in the system by revealing the deeply ingrained corruption in the higher order, saying that the troops are not even getting basic three square meals.