India   All India  20 Apr 2017  Commemorating Champaran: The place where it all began
India, All India

Commemorating Champaran: The place where it all began

From the beginning of the 20th century, the raiyats of Champaran were time and again protesting against their oppression. 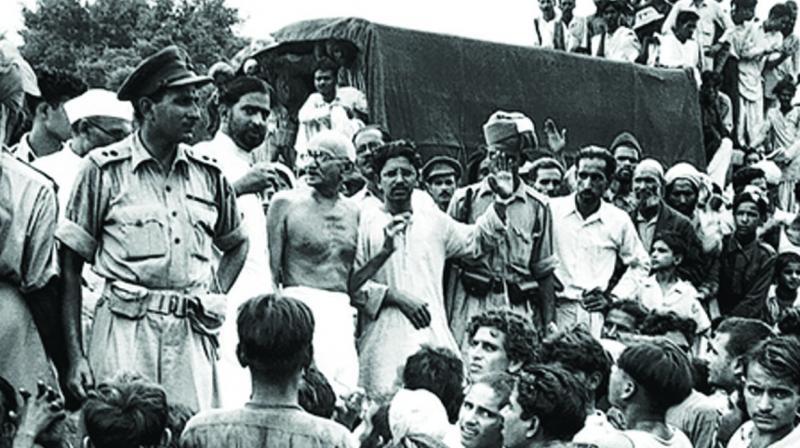 Mahatma Gandhi being arrested in the Champaran district of Bihar in April 1917.

A new era had started in India’s freedom struggle when Gandhi launched his first satyagraha in Champaran district in Bihar in April 1917 for redressing the grievances of the indigo cultivators. This was an entirely non-violent movement.

Indigo was being cultivated in north Bihar for over a century. Largely British planters owned the plantations. Indigo from Champaran and Tirhut was sold at a very high price in the markets of London and Europe. While the planters made huge profits, the peasants were paid in peanuts and were forced to cultivate indigo under the tinkathia system. Twenty kathias were equal to one acre and peasants had to cultivate 3/20th of this. In addition to the regular tax, the amlas or subordinates of the European planters exacted numerous illegal taxes from the indigo cultivators.

From the beginning of the 20th century, the raiyats of Champaran were time and again protesting against their oppression. But the administration was behind the planters and the violent protests were unsuccessful. Legal battles were fought, but the peasants were too poor to afford litigation.

Rajkumar Shukla of Bettiah, a representative of the indigo cultivators decided to take up their cause. He went to the Lucknow session of the Indian National Congress in 1916 and met leaders, among them Madan Mohan Malaviya and Lokmanya Tilak, and urged them to take up the cause of the indigo cultivators, but they replied that the country’s political freedom was their first priority.

Shukla then approached Gandhi. He had heard about Gandhi’s struggle in South Africa and urged him to do something for the poor peasants of Champaran. Gandhi said that he could give no opinion unless he saw the condition of the peasants with his own eyes. Shukla then asked him to come to Bihar and persistently pursued Gandhi till the latter relented. Gandhi was in Calcutta and on April 7 accompanied by Shukla left for Champaran.

On his way to Champaran, Gandhi arrived in Patna with only a small bundle of bedding, some papers and a box of dry fruits. From Patna he went to Muzaffarpur where he met the commissioner and told him that he would visit Motihari and Bettiah to look into the grievances of the cultivators. The commissioner discouraged him from doing so as the government was already looking into the matter. But Gandhi insisted.

As soon as he entered Champaran, a notice under the criminal penal code was served on him by the SDO of Motihari to leave Champaran. As Gandhi had anticipated this, he was not surprised.

Gandhi appeared before the sub-divisional magistrate on April 18, and read a statement in which he said that he was taking the serious step of “seemingly disobeying the order made under Section 144 of the Criminal PC…I have entered the country with motives of rendering humanitarian and national services.” He said that he had come to help the raiyats who were complaining about unfair treatment by the indigo planters.” He fully understood the difficulty of the administration and as a law-abiding citizen, his first instinct would be to obey the order. But this would be violating his sense of duty towards the oppressed. He could serve them only by remaining in their midst. He had decided “to submit without protest to the penalty of disobedience…I have disregarded the order served upon me, not for want of respect for lawful authority, but in obedience to the higher law of our being the voice of conscience.” Gandhi returned the Kaisar-i-Hind Medal given to him by the British monarch for the services rendered by him in World War I.

The news of the summons spread like wildfire and Motihari witnessed scenes it had never seen before. Thousands thronged the court where Gandhi appeared. Just before the court was to announce the verdict, Gandhi got an order from the magistrate that the Viceroy had said that the case should be withdrawn. The Lt. governor of Bengal, Sir Edward Gait had a role to play in this along with. Rev. C.F. Andrews. It was difficult for persons in power to deal with a man who was prepared to suffer for what he considered to be right. Gandhi’s statement and acquittal were reported widely in the press.

Thereafter Gandhi and his band of his followers tirelessly continued their work of collecting evidence from thousands of raiyats. After a prolonged exchange of letters between government officials and Gandhi and a long meeting between Gandhi and Gait an enquiry committee was appointed consisting of government officers, planters and Gandhi.

Gandhi agreed that the report of the committee should make no mention of the oppression of the raiyats, but the tinkathia system had to be abolished and the planters had to return the money they had illegally held back from the cultivators.

After considerable deliberations, the committee agreed on a unanimous report. Gait played a crucial role in finalising the report and passing the official order based on it. The indigo planters were extremely unhappy with the outcome.

Gandhi had come alone and unknown in Bihar but in a short time he had collected around him a group of individuals who became his lifelong followers. Among these were Rajendra Prasad, Anugrah Narayan Sinha, Ramdayalu Babu, Ramnavmi Prasad, Brijkishore Prasad and affluent lawyers who charged enormous fees. They offered to help Gandhi. He told them that all the documents were in Kaithi or Urdu, which he could not read, so he wanted them to translate these as well as the evidence recorded in Bhojpuri. He was not going to pay them for this work. They agreed. Gandhi made them cook their own food, wash their clothes, sweep their rooms, clean the utensils, sleep on the floor and travel third class. Their lives changed forever and they became lifelong Gandhians.

Gandhi had come to Bihar as an unknown figure. Six months later, he was given a hero’s farewell with around 40,000 people seeing him off. Champaran was a mass movement where Gandhi proved that if people were fearless and prepared to suffer they could achieve their goal without violence. It was here that he forged his weapon of satyagraha by which India became free.

The writer, a former professor of history at Delhi university, is chairperson of the National Gandhi Museum, Rajghat, New Delhi