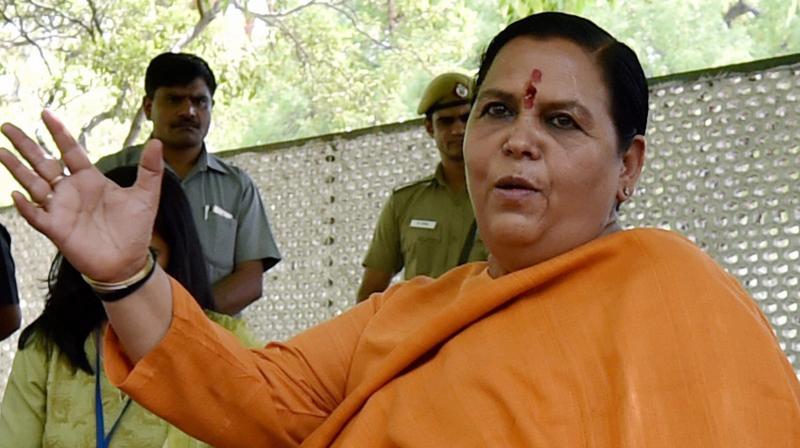 New Delhi: The BJP has decided to stand behind the saffron heavyweights — to be tried for criminal conspiracy in the Babri mosque demolition case — and provide “all possible support” to them.

The BJP, which has been raking up the Ayodhya issue, made it clear that Union minister Uma Bharti would not be asked to quit the Cabinet.

The party, however, stopped Ms Bharti from going to Ayodhya to offer prayers. Soon after the Supreme Court order, she had announced that she would visit Ayodhya to seek lord Ram’s blessings for early construction of a grand Ram temple at the disputed site.

Sources said that after the meeting with the PM, the BJP chief asked Ms Bharti to cancel her planned Ayodhya trip.

Speaking to the media after the SC ruling, Ms Bharti claimed that there was “no conspiracy.” She insisted that everything “happened in the open.”  .

The BJP, which has decided to provide “help” to the accused, however, was against intensifying the Ayodhya issue at a time when the party was trying to send a positive signal to Muslims, particularly the women with its stand against triple talaq.

The party intends to keep the Ayodhya issue on the slow fire and increase pressure when the “time is ripe,” a senior party functionary said.

While the SC decision could be described as a blow to Mr Advani and Mr Joshi, who anyway have been marginalised in the organisation, BJP spin doctors feel that the party will eventually gain as the two-year trial would keep the Ayodhya pot boiling. This apparently would help the BJP continue blending Hindutva with development, which worked in the party’s favour in electoral politics.

Moreover BJP strategists argued that the Congress, which was desperately trying to shed its pro-Muslim and anti-Hindu image, would not be in a position to attack the BJP on the Ayodhya issue.

It was further argued that even if the leaders were eventually convicted, the “martyrdom card for the Hindutva cause” could well be played.

Ms Bharti already claimed that she was “ready to face any punishment” for the Ram temple cause.

With the Congress demanding Ms Bharti’s resignation, she claimed that while Rajiv Gandhi was trying to “justify” the massacre of Sikhs during the 1984 anti-Sikh riots, Sonia Gandhi was with him. She asked, “Can we accuse Sonia Gandhi of conspiracy?”

She claimed that the Congress has “no right” to seek her resignation.