SC raps CBI, UP govt, blames them for delaying case for years. 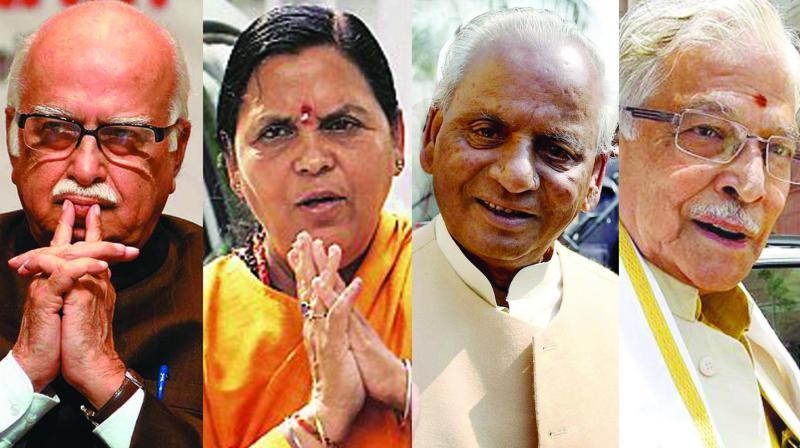 New Delhi: Senior BJP leaders L.K. Advani, M.M. Joshi, Uma Bharti and nine others will be tried for conspiring to demolish Babri masjid in Ayodhya in 1992, the Supreme Court ruled on Wednesday.

Kalyan Singh, also an accused who was the Uttar Pradesh chief minister at the time of the demolition, has constitutional immunity since he is Rajasthan’s governor. Charges would be framed against him once he leaves office, the court said.

A bench of justices Pinaki Chandra Ghose and Rohinton Nariman accepted the CBI’s plea for revival of conspiracy charges — dropped 16 years ago by a lower court on technical grounds — against the 12 accused, and ordered daily hearing by a Lucknow court. Setting a two-year deadline for the trial to be completed, the court said there would not be any adjournments and the judge would not be transferred till the verdict was delivered.

The court also instructed the CBI to ensure that some prosecution witnesses remain present every day during the trial. 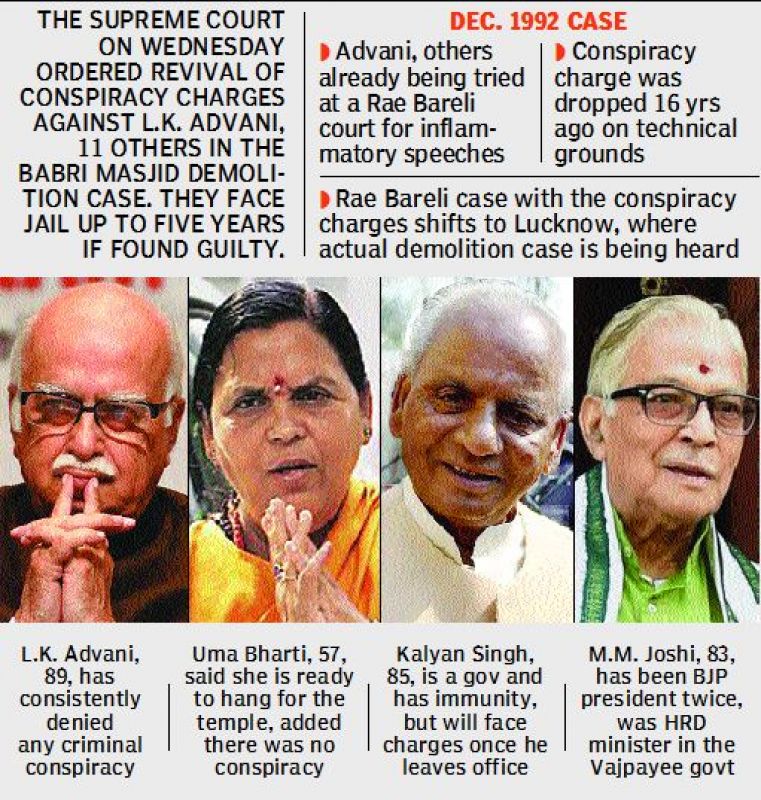 A Rae Bareli court is trying Mr Advani and others for inflammatory speeches. After the addition of conspiracy charges, the case will shift to Lucknow where kar sevaks are being tried for the actual demolition. Mr Advani and others will be sentenced to five years jail if found guilty. There will not be a fresh trial.

Hindu mobs had demolished the 16th century mosque, claiming it was built on the birthplace of lord Ram, triggering some of India’s worst riots since Partition.

Writing the judgment, Justice Nariman said, “In the present case, crimes that shake the secular fabric of the Constitution have allegedly been committed almost 25 years ago. The accused persons have not been brought to book largely because of the conduct of the CBI in not pursuing the prosecution of the aforesaid alleged offenders in a joint trial, and because of technical defects which were easily curable, but which were not cured by the Uttar Pradesh government.”

The Supreme Court also faulted the Allahabad high court for upholding the lower court order to drop conspiracy charges on the ground that only the demolition case — and not the conspiracy one — had been transferred to the CBI.

The CBI had filed an appeal in 2011, when the UPA was in power, against the dropping of conspiracy charges.

The court rejected Mr Advani’s submission that the trial at Rae Bareli cannot be shifted, saying the evidence for all the offences was almost the same.

Once the trial is shifted, the Lucknow court will frame the additional conspiracy charges under Section 120-B of the IPC within four weeks against the four and others, including Vinay Katiyar and Sadhvi Ritambara.

There are two sets of cases — one against Mr Advani and 11 others who were on the dais at Ram Katha Kunj in Ayodhya when the mosque was demolished, while the other case was against unknown karsevaks who were in and around the disputed structure.

The CBI has alleges that Mr Advani and the other leaders had hatched a conspiracy to bring down the mosque in 1990. It has also alleged that the leaders met at the residence of Vinay Katiyar on the night before the demolition, during which a final decision was taken.