India   All India  20 Mar 2019  A true revolutionary: What lay behind the political philosophy of Bhagat Singh
India, All India

A true revolutionary: What lay behind the political philosophy of Bhagat Singh

Bhagat Singh was in prison for two years before he was hanged on March 23, 1931. 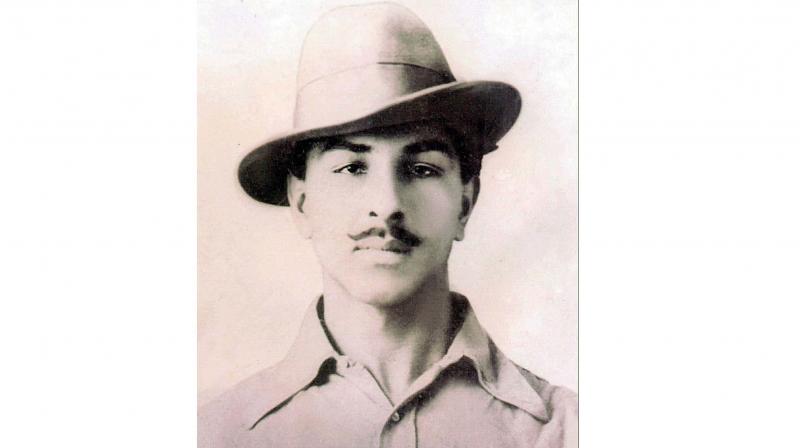 Revolution (Inquilab) is not a culture of bomb and pistol.  Our meaning of revolution is to change the present conditions, which are based on manifest injustice.
— Bhagat Singh

March 23 will mark the 89th martyrdom day of Shaheed Bhagat Singh, one of the most iconic figures of India’s freedom struggle. Bhagat Singh is held in great esteem and admired not only in India, where his popularity is only increasing with the years, but now also in Pakistan, where he is considered a “shared hero” between the two neighbouring countries. Bhagat Singh’s image as an anti-colonialist and a fiery nationalist is not complete, for he was much more than a martyr.  His deep commitment to “Inquilab” was not merely political but also social as he wanted a revolution not only to free India from bondage, but also from the age-old discriminatory practices of caste, creed, religion and supersitition. What is less well known is that Bhagat Singh was a great political thinker and a prolific writer.

Bhagat Singh was in prison for two years before he was hanged on March 23, 1931. While in jail he maintained a diary in which he wrote his account of what he read and had liked. Some of his favourite authors were Bertrand Russell, Trotsky, Karl Marx, Frederick Engels, V.I. Lenin, Upton Sinclair, Robert Louis Tennyson and Rabindranath Tagore.  This Jail Notebook is a good source to understand Bhagat Singh’s intellectual and literary preferences. It establishes the fact that he accepted Marxism as his political ideology. What an irony, therefore, that the right-wing elements, with their ingrained communalism, are making attempts to hijack the legacy of this great revolutionary.

Though most of Bhagat Singh’s important articles were written in jail, he wrote a number of other essays from 1924 onwards when he was only 17. On November 22, 1924 Bhagat Singh concluded his article “Universal Brotherhood” thus: “If you are really interested in preaching peace, happiness and universal brotherhood, then learn to react against insult and indignity. Be prepared to die to undo the damage of your motherhood — Be ready to die so that Mother India may live. Then and then alone our country will be free, and we will be empowered and be able to preach universal brotherhood and force the world to walk on the path of peace.”

The Calcutta session of the Indian National Congress, presided over by Pandit Motilal Nehru, was held in December 1928. Almost six months before the session, Bhagat Singh wrote (June 1928): “The martyrs of 1914-15 had separated religion from politics... Some Indian leaders (meaning Congress leaders like Jawaharlal Nehru and Subhas Chandra Bose)  also wish to separate religion from politics. ...If religion is separated from politics, then all of us can jointly initiate political activities, even though in matters of religion we might have many differences with each other. We feel that true well-wishers of India would follow these principles and save India from the suicidal path it is on
at present.”

“Why I am an Atheist”, perhaps the most well-known article by Bhagat Singh, was written while he was in prison and was first published in The People, a paper founded by Lala Lajpat Rai. Explaining one of the reasons for his being an atheist, Bhagat Singh writes: “I ask why your omnipotent God does not stop every person when he is committing any sin or offence?  He can do it quite easily. Why did he not kill warlords or kill the fury of war in them and thus avoid the castrophe hurled down on the head of humanity by the Great War?  Why does not he produce a sentiment in the minds of the British people to liberate India? Why does he not infuse altruistic enthusiasm in the hearts of all capitalists to forego their right of personal possessions of the means of production and thus redeem the whole labour commutiy from the bondage of capitalism?” He also writes: “British rule is here not because God willed it, but because they possess power... It is not with the help of God that they keep us under their subjucation but with guns and rifles, bombs and bullets, the police and militia, and it is because of our apathy that they are successfully committing the most deplorable sin against society – the outrageous exploitation of one nation by another.  Where is God?  What is he doing?  Is he enjoying all these woes of the human race?  A Nero, a Changez:  down with him”  Bhagat Singh concludes: ‘The idea of God is helpful to man in distress.  Society has to fight this belief as well as idol worship and narrow conception of religion.  Similarly when man tries to stand on his own two legs, and becomes a realist, he shall have to throw faith aside and face manfully all the distress and trouble in which circumstances may land him. That is exactly my state of affairs. It is not my vanity, my friends. It is my mode of thinking that has made me an atheist... I have read of atheists facing all troubles quite boldly, so am I trying to stand like a man with head held high to the last, even to the gallows.”

While in jail, Bhagat Singh — besides his associates, Sukhdev and Rajguru — went on a strike along with other political prisoners, who included the famed Bengal revolutionary Jatin Das. The purpose of the strike was to improve jail conditions and the provision of facilities at par with European prisoners. The fast lasted 116 days, although Jatin Das died after 63 days. His body was sent to Calcutta, where nearly six lakh people waited at the Howrah railway station. A few weeks before Jatin Das died, Jawaharlal Nehru, who was soon to take over as Congress president, visited him as well as Bhagat Singh in jail. This finds mention in his Autobiography: “I happened to be in Lahore when the hungerstrike was already a month old.  I was given permission to visit the prison. I saw Bhagat Singh for the first time and Jatin Das and a few others. They were all very weak and bedridden, and it was hardly possible to talk to them much. Bhagat Singh had an attractive, intellectual face, remarkably calm and peaceful. There seems to be no anger in it. He looked and talked with great gentleness... Jatin Das looked milder still, soft and gentle. He was in considerable pain when I saw him. Deeply touched, Nehru issued a press statement: “I was very much pained to see the distress of the heros. They have staked their lives in the struggle. They want that political prisoners should be treated as political prisoners. I am quite hopeful that their sacrifice would be crowned with success.”

The revolutionary Bhagat Singh was deeply committed to socialism. It was therefore natural that he greatly admired the two youth icons of his day — Jawaharlal Nehru and Subhas Chandra Bose. In 1928, he wrote: “The most important young leaders in the present scenario are Bengal’s

Subhas Chandra Bose and Pandit Jawaharlal Nehru. These two leaders are making their presence felt and are participating in the movements of the youth in a big way. Both are wise and true patriots.”

After explaining the virtues and attributes of both great leaders, Bhagat Singh appeals to the youth of Punjab: “The need of the hour is that Punjabi youth should ponder over these revolutionary thoughts and make up their minds. Punjab needs food for thought and this can be provided only by Pandit Nehru. This does not mean that we should be blind followers. But as for as views are concerned it is time for the Punjabi youth to follow him, so that they may know the true meaning of Inquilab, the need for Inquilab in Hindustan and the place of Inquilab in the world.” On February 2, 1931, a few days weeks he was hanged, Bhagat Singh advised the youth: “Crush your individuality first, shake off the dreams of personal comfort. Then start to work. Inch by inch you shall have to proceed. It needs courage, perseverance and very strong determination. No difficulties and no hardships shall discourage you.

No failures and betrayals shall dishearten you ... through the ordeal of sufferings and sacrifice, you shall come out victorious!”

The writer, an ex-Army officer, is a former member of the National Commission for Minorities and a political activist based in New Delhi