India   All India  20 Mar 2018  Told govt all 39 were dead, yet they misguided families: Escaped hostage
India, All India

Told govt all 39 were dead, yet they misguided families: Escaped hostage

However, the Centre denied escaped hostage Harjit Masih's claims saying that he had lied. 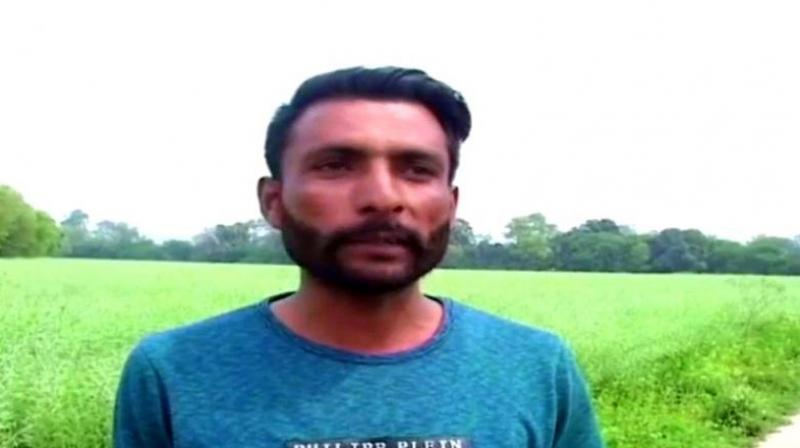 'I told the truth that 39 Indians were killed. The government has misled the 39 families who lost their relatives,' said Harjit Masih. (Photo: Twitter | ANI)

New Delhi: Harjit Masih, one of the hostages who escaped from Iraq's Mosul earlier, on Tuesday said that the Government has mislead families of all the 39 Indian hostages killed in Iraq by ISIS.

"I told the truth that 39 Indians were killed. The government has misled the 39 families who lost their relatives," said Harjit Masih.

In her address in the Rajya Sabha, External Affairs Minister Sushma Swaraj on Tuesday confirmed that all the 39 Indians kidnapped by the ISIS in Iraq in 2014 were killed.

Families of the hostages reacted with shock and grief to the news.

Some, like Gurpinder Kaur, refused to believe that her younger brother Manjinder Singh had been killed.

"This is absolutely shocking because my sources say they are alive. For the past four years External Affairs Minister was telling me that they were alive, don't know what to believe anymore. I am waiting to speak with her (Sushma Swaraj), no information was given to us, we heard her statement she made in Parliament. Without letting us know today, she informed the world that they are dead. The news has been on for two hours but we are yet to be informed," said Gurpinder Kaur.

Harjit Kaur, wife of Gurucharan Singh, who was among the 39 Indian hostages killed in Mosul question the government for informing it so late about the killing.

"He (Gurucharan Singh) left for Mosul in 2013-14. They had been saying that all of them are alright and now they say this. I don't even know what to say," said Harjit Kaur.

"We had got information that that my brother was abducted by terrorists, after that nothing was known about his whereabouts. My DNA test was done twice, but we received no information," said brother of an Indian national from Jalandhar who was among 39 killed Mosul.

"My husband went to Iraq in 2011 and I spoke to him last on 15 June, 2014. We were always told us that they were alive," Manjeet Kaur wife of Davinder Singh from Jalandhar who was among the Indians killed in Iraq.

"I don't know what to say. Since 2014 I had been pleading with the govt to bring him back somehow and today they say that he is no more," Puroshottam Tiwari, Uncle of Vidya Bhushan Tiwari, a resident of Bihar, who was among 39 Indians killed in Iraq's Mosul.

On July 2017, the government had said it would presume that the Indians were alive until proof indicated otherwise.

"Declaring anyone dead without proof is a sin and I won't commit a sin," Sushma Swaraj said in the Lok Sabha, responding to allegations that she was "misleading the house" on whether the Indians were alive.

The minister told the Rajya Sabha that remains of 30 bodies found underneath a mass grave, with distinctive features like long hair, IDs and non-Iraqi shoes. These were tracked down with a deep penetration satellite and the remains were taken to Baghdad for DNA testing.

The remains will be brought back in eight or ten days, Minister of State for Foreign Affairs VK Singh said.

More than 10,000 Indians fled Iraq amid the upsurge in violence in 2014, including dozens of nurses who were held briefly by suspected IS militants in Tikrit and Mosul before being allowed to return home.