Amid slogan shouting, Lok Sabha was adjourned for the day with Speaker terming the scenes as unfortunate. 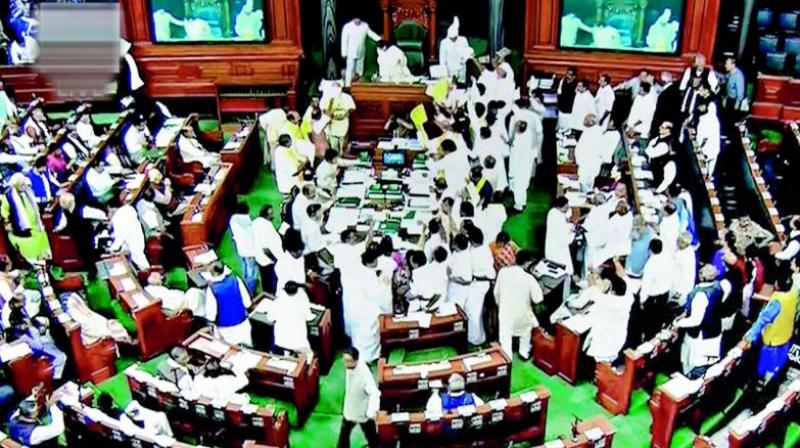 Amid the din, the notices of no-confidence motion against the government could not be taken up for the third day on Monday. (Photo: File/PTI)

New Delhi: External Affairs Minister Sushma Swaraj was on Tuesday unable to make an elaborate statement in the Lok Sabha on the 39 Indians killed in Iraq due to ruckus created by slogan-shouting members.

Amid the din, the notices of no-confidence motion against the government could not be taken up for the third day on Monday.

Lok Sabha Speaker Sumitra Mahajan said that the House was not in order, therefore, she cannot verify whether the members who have given the notices can go ahead with moving the motion.

Amid slogan shouting by members from various parties, the House was adjourned for the day with Mahajan terming the scenes as unfortunate.

A bill to ban unregulated chit fund schemes was also introduced amid disruptions.

As soon as the House met again at 12 noon, Mahajan asked ministers to lay papers which were part of the agenda. Soon, AIADMK and TDP members rushed into the Well and started raising slogans in support of their demands.

Congress members, who were at their seats, objected to the disruptions, saying this would prevent notices of no trust vote to be taken up.

The Speaker urged the members to maintain order as Swaraj wanted to inform the house about a "serious" issue. At this moment, Congress and Left members started raising slogans such as "no no", drowning the voice of Swaraj.

"She wants to inform the House about the 39 Indians killed in Iraq. Please listen to her," the Speaker said.

Swaraj noted that she cannot make a statement in the din as it was a serious issue.

She recalled that the Lok Sabha had on several occasions discussed about the fate of the 39 Indians on which the government had maintained that they could not be declared dead without "concrete evidence".

"I want to present the evidence today. Please listen to me...please maintain silence," the minister said, amid slogan shouting by Congress, AAP and Left members.

When she was speaking, AIADMK members maintained silence and did not raise slogans.

Swaraj said when she made a similar statement in the Rajya Sabha earlier in the day, she received co-operation of all members who listened to her silently.

She said that an organisation would be holding a press conference in Iraq on the issue soon and it would be proper that Indians come to know about the fate of the abducted nationals from the government and not from another country.

She said there has been a 100 per cent DNA match of the 38 victims and 70 per cent match in case of one of bodies found in Iraq.

As Sushma's statement was repeatedly disrupted by opposition members, an anguished Speaker wondered whether the members have become "insensitive" and have "lost compassion" towards fellow countrymen.

"Don't indulge in such politics. Don't be so insensitive...this is a very sorry state.... It has never been such a sorry state (of affairs). It is sad," the Speaker remarked.

After Swaraj took her seat, the Speaker referred to the notices of no-confidence against the Council of Ministers.

She said she is duty-bound to take up the matter but since the House is not in order, she cannot verify whether the members who have given notices can move the motion.

When she referred to the notices, members from the TDP and the AIADMK were seen shouting slogans.

At least fifty members have to support the motion before it is moved. A headcount is difficult when there are disruptions and several members are standing, former top LS officials have explained.

As the ruckus continued, the Speaker adjourned the House for the day.