India   All India  20 Mar 2018  Hopes trashed as kin get informed on TV about Indian captives' death
India, All India

Several relatives of the killed workers said they were not officially informed about their loved ones by any government authority. 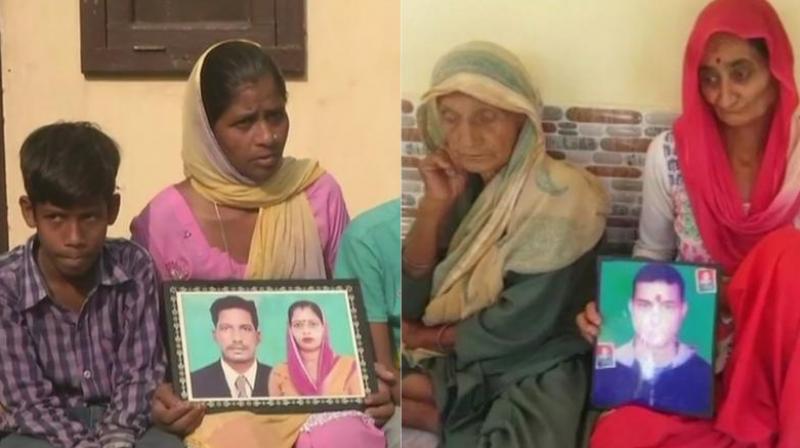 External Affairs minister Sushma Swaraj had told Parliament on Tuesday that all 39 Indians, abducted by the ISIS in Iraq nearly three years back, were killed and their bodies were recovered. (Photo: ANI/Twitter)

Chandigarh: As they try to come to terms with the bitter reality, family members of the 39 Indians massacred years ago by terror organisation ISIS in Iraq question why the "Centre kept them in the dark" all this while.

Heart-rending scenes were visible outside the homes of the deceased in Punjab as wailing family members tried to give vent to their pain having heard on TV, External Affairs Minister Sushma Swaraj's statement that all 39 Indians in ISIS captivity were dead and their bodies had been recovered.

Several relatives of the killed workers said they were not officially informed about their loved ones by any government authority.

What do we say now? asked a dejected Sarwan whose 31-year-old brother Nishan was among those killed.

"The government kept us in the dark all these years, Sarwan, who belongs to Amritsar, claimed. Now after four years, they are making such a shocking statement, he agonised.

"We met the Union minister (Swaraj) 11 to 12 times and were told that as per their sources, the missing Indians are alive. They have been saying that Harjit Masih, the lone survivor, is a liar. If your sources have been saying they were alive and now suddenly what happened. The government should have told us they have no information about missing Indians rather than making false statements," said Sarwan, who received heard his brother's voice over a phone call in June 21, 2014.

With hopes dashed all of a sudden, anger seethes out.

"It is the government's biggest failure. Most of the missing Indians were from Punjab. When the government could save nurses from Kerala why it completely failed in saving other Indians," he asked.

We have been seeking time from the minister for the last several months but we were not given a chance to meet her, he claimed.

"Initially, they were saying the Indians are alive. Now the minister today made such a statement," Kaur said, her voice choking. We were not even told about it; we came to know from the TV, she added.

Manjinder Singh, who was into farming, was pushed into Iraq by fraudulent travel agents, she claimed. Manjinder Singh wanted to go to Dubai, said Kaur. "I am trying to know from the government how all this happened," she said.

The family of Gobinder Singh learnt about the shattering news also from TV channels. "We have not received yet received any call from the Union ministry about the confirmation of death of 39 Indians," said Davinder Singh, the deceased's younger brother.

"We just got false assurances from the government," said Dimplejeet Kaur, sister of Dharminder Kumar (27). "All our hopes were dashed today," she said.

Kumar went to Iraq to earn for his family in 2014. He was a resident of village Talwandi Jhira in Gurdaspur district.

Last year, the government of India collected DNA samples of the family members of the missing Indians.

Among the 39 Indians who were missing, most were from different places in Punjab like Amritsar, Gurdaspur, Hoshiarpur, Kapurthala and Jalandhar.

External Affairs minister Sushma Swaraj had told Parliament on Tuesday that all 39 Indians, abducted by the ISIS in Iraq nearly three years back, were killed and their bodies were recovered.

As many as 40 Indians were originally abducted by terrorist organisation ISIS in June 2015 from Mosul in Iraq but one of them escaped by posing as a Muslim from Bangladesh, Swaraj said in a suo motu statement in Rajya Sabha.

The remaining 39 Indians were taken to Badoosh and killed, she said.

Search operations led to a mound in Badoosh where locals said some bodies were buried by the ISIS. Deep penetration radars were used to establish that the mound indeed was a mass grave, she said, adding the Indian authorities requested their Iraqi counterpart to exhume the bodies.

Swaraj said the mass grave had exactly 39 bodies, with distinctive features like long hair, non-Iraqi shoes and IDs. The bodies were sent to Baghdad for DNA testing.

DNA testing by Martyrs Foundation established the identity of 38 Indians while there has been 70 per cent matching of the DNA for the 39th person, she said.

Minister of State for External Affairs V K Singh will be flying to Iraq to bring back the bodies on a special flight, she added.