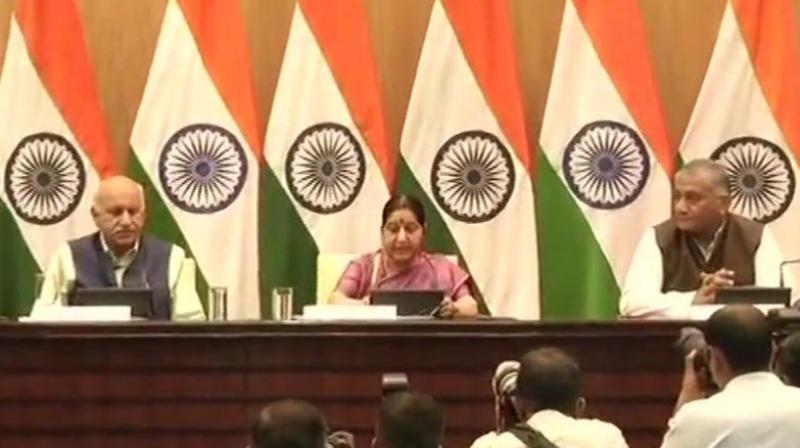 The External Affairs Minister termed the action of the opposition leaders as unfortunate. (Photo: ANI)

New Delhi: Hours after External Affairs Minister Sushma Swaraj was interrupted from giving an elaborate statement in the Lok Sabha on the issue of 39 Indians killed by ISIS in Iraq, the EAM termed the action of the opposition leaders as unfortunate.

She said she thought that the leaders would listen to her patiently and in peace on the issue as in Rajya Sabha.

Clarifying herself, Sushma said she had personally talked to the foreign ministers of the respective countries and had also asked for evidence for the death of the 39 Indians in Iraq's Mosul.

"This government does not consider missing ones as being killed," Sushma said while addressing the media.

Clarifying on why the kin of the victims were not informed before the parliament  about the deaths, Sushma said it was her duty and parliamentary procedure to inform the House first before anyone else.

"It would have been a sin had we handed over anybody's body claiming it to be those of our people, just for the sake of closing files," Sushma said.

The minister said that she was satisfied that she had stated that the Government would declare them dead only on the day it gets concrete evidence.

"I kept my word. I will get my closure when I would hand over the mortal remains to their families and they receive proper last rites," she added.

Sushma Swaraj said DNA samples of 38 people have been matched and verification of one victim was under process.

Out of the deceased, 27 people were from Punjab, 6 from Bihar, 4 from Himachal Pradesh and 2 from West Bengal. The identity of one of them is yet to be verified, she said.

Speaking on Harjit Masih's claims, Sushma said that he is just an individual who can simply claim that 39 others are dead, adding that the Government cannot say so very easily as it has to be responsible.

"It is baseless that Masih was harassed and that he was kept in protective custody," she said.

Harjit Masih, one of the hostages who escaped from Iraq's Mosul, earlier on Tuesday said that the Government has mislead families of all the 39 Indian hostages killed in Iraq by ISIS.

"I told the truth that 39 Indians were killed. The government has misled the 39 families who lost their relatives," said Harjit Masih.

In her address in the Rajya Sabha, External Affairs Minister Sushma Swaraj on Tuesday said all 39 Indians kidnapped by ISIS in Mosul three years ago are dead.