India   All India  20 Mar 2018  Centre refuses to give assurance on Rohingyas
India, All India

Centre refuses to give assurance on Rohingyas

The ASG asked the court to take note of change of demography due to influx of refugees, destabilisationa and disintegration of society. 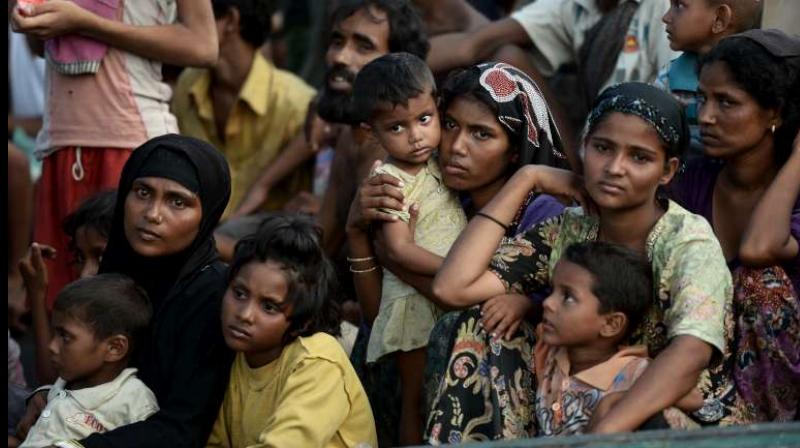 It was a human rights issue as they are being butchered in Myanmar following ethnic war. (Photo: AFP)

New Delhi: The Centre on Monday refused to five any assurance in Supreme Court that Rohingya Muslims would not be pushed back to Myanmar, except saying that those who are already in India would be given medical facilities.

Additional solicitor general Tushar Mehta made this oral statement before a three-judge Bench of Chief Justice Dipak Misra and Justices A.M. Kanwilkar and D.Y. Chandrachud hearing a batch of petitions seeking to restrain India from deporting 40,000 Rohingyas to Myanmar. Taking note of the submission, the Bench posted the matter for final hearing on April 9.

The ASG told the court that the government was exploring diplomatic solutions being worked at the executive level and the court should not pass any order at this stage and it should be left to the wisdom of the executive. It would not be in national interest for the court to issue a direction to stop their deportation.

The additional solicitor general said India is already facing serious problems of infiltration because of its porous border with other countries, which is the root cause of spread of terrorism in the country, which is taking thousands of lives of innocent citizens and security personnel. Securing the borders of any sovereign nation in accordance with law, is an essentially function and this court would not issue any direction not only to the Central government but also to all States having a common border. The ASG asked the court to take note of change of demography due to influx of refugees, destabilisationa and disintegration of society.

Counsel Prashant Bhushan, Colin Gonsalves and Ashwini Kumar brought to the notice of the court that the BSF is pushing the Rohingyas trying to enter the country as refugees.

It was a human rights issue as they are being butchered in Myanmar following ethnic war. For those already in India medical and education facilities are not provided and pleaded with the court to issue necessary directions.