39 Indians who were taken hostage in Iraq's Mosul have died: Sushma Swaraj told in her Rajya Sabh address. 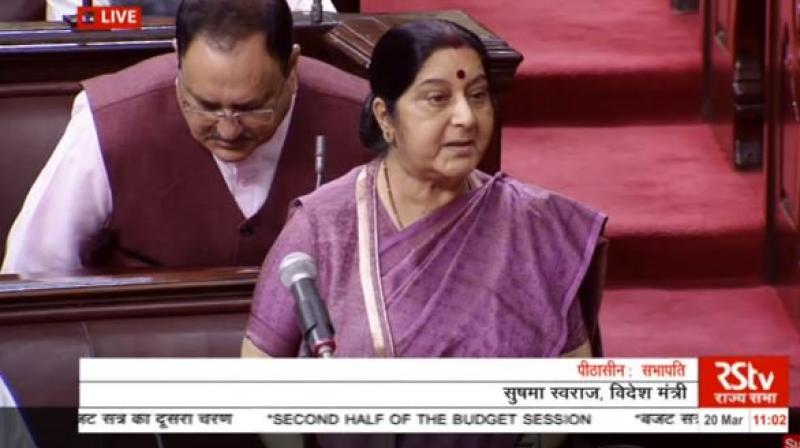 'Deep penetration radar confirmed that all Indians were dead after all bodies were exhumed,' said Sushma Swaraj. (Photo: Screengrab)

New Delhi: 39 Indians who were taken hostage in Iraq's Mosul have died, External Affairs Minister Sushma Swaraj told in her address in Rajya Sabha on Tuesday.

“Deep penetration radar confirmed that all Indians were dead after all bodies were exhumed,” said Sushma Swaraj.

Sushma Swaraj said that the mortal remains were sent to Baghdad. She said, “For verification of bodies DNA samples of relatives were sent there, four state government - Punjab, Himachal Pradesh, West Bengal and Bihar were involved.”

The foreign minister said, “Yesterday (Monday) we got information that DNA samples of 38 people have matched and DNA of the 39th person has matched 70 per cent.”

“The plane carrying mortal remains will first go to Amritsar, then to Patna and then to Kolkata,” said Sushma Swaraj.

The group of Indian labourers, mostly from Punjab, was taken hostage by ISIS when it overran Iraq's second largest city Mosul in 2014. The workers were trying to leave Mosul when they were intercepted.

In 2017, Sushma Swaraj had told the families of the workers that an Iraqi official, quoting intelligence sources, had told VK Singh that the Indians were made to work at a hospital construction site and then shifted to a farm before they were put in a jail in Badush.

The government had been attacked by Opposition including the Congress of misleading the country by saying that the prisoners were in a prison in Badush in Mosul.

Partap Singh Bajwa, a lawmaker of the main opposition party, referred to media reports that the jail that Sushma Swaraj referred to was in ruins and charged: "She has lost all credibility".

One of the captured Indians, Harjit Masih from Gurdaspur, had managed to escape and had claimed to have witnessed the massacre of the others. But the government rejected it.

More than 10,000 Indians fled Iraq amid the upsurge in violence in 2014, including dozens of nurses who were held briefly by suspected IS militants in Tikrit and Mosul before being allowed to return home.