PM said that coating urea with neem has helped in enhancing efficiency of fertiliser and boosting productivity as also led to cost saving. 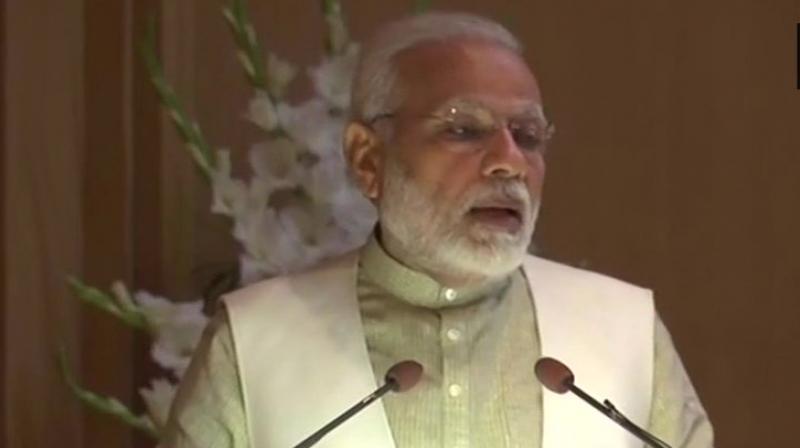 Addressing a conference on 'doubling farm income by 2022', Modi said pulses production in the country has risen to 23 mn tonnes from 17 mn tonnes in just one year. (Photo: ANI | Twitter)

Addressing a conference on 'doubling farm income by 2022', he said pulses production in the country has risen to 23 million tonnes from 17 million tonnes in just one year.

Modi also mentioned about steps taken to lower cost of production, improve productivity and take farm produce to markets by minimising wastage and said these measures will help in increasing farmers' income.

The prime minister also said that coating urea with neem has helped in enhancing efficiency of fertiliser and boosting productivity as also led to cost saving.

Also, soil health cards -- providing detailed analysis of state of soil and the crops it can support best -- have improved productivity, he said, adding that this has helped curb use of chemical fertiliser by 8 to 10 per cent and increase productivity by 5 to 6 per cent.

Modi said as many as 99 irrigation schemes that had been stuck for 2-3 decades will be completed within a specified time-frame and Rs 80,000 crore has been allocated for the same.

Half of these schemes would be completed by 2018 end and remaining in 2019, he added.

In the budget 2018-19, 'Operation Greens' has been announced to augment farm supply chain that will help cultivation of tomato, onion and potato, he said.

The prime minister said 22,000 rural markets would be upgraded so as to provide a market for farm produce within 5-15 km distance of production points.

The government, he said, is also encouraging Farmer Producer Organisation.

Also, the provision for agri-credit has been raised to Rs 11 lakh crore from Rs 8 lakh crore.

Promoting use of solar energy, converting agriculture waste into wealth and economical use of crop residue will also help in doubling of farmers' income by 2022, he said.

With this in mind, the government has also approved blending of up to 10 per cent sugarcane-extracted ethanol in petrol, the prime minister added.

Modi said as much as Rs 11,000-crore claims have been settled under the crop insurance scheme, which is double of the past amount.