Mr Zeliang earlier announced in a signed statement to newspapers that he had decided to step down from office on Monday. 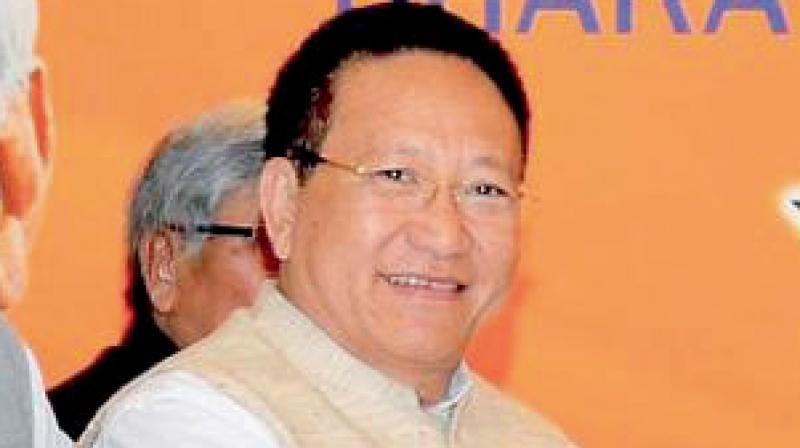 Guwahati: Amid political turmoil, Nagaland chief minister T.R. Zeliang submitted his resignation to governor P.B. Acharya in Kohima late on Sunday night. Mr Acharya accepted the resignation and asked him to continue in a caretaker capacity till alternative arrangements could be made, sources in the Kohima Raj Bhavan told this newspaper.

Saying he would tender his resignation at the MLAs’ meeting, Mr Zeliang said that the NPF Legislature Party that would meet at around 11 am would then elect the new leader.

Sources in the ruling Nagaland Peoples Front have indicated that the transition of power may not be very smooth, and that Mr Zeliang was still lobbying for his party president Shürhozelie Liezietsu as his successor.

Nagaland has been in turmoil since January after the Zeliang government decided to hold local body polls in 12 towns across the state while giving 33 per cent reservations to women as mandated by the law.

Tribal groups — under the banner of the Nagaland Tribes Action Committee (NTAC) and the Joint Coordination Committee (JCC) — which oppose the implementation of a Central law granting 33 per cent reservation for women in local body polls, intensified their agitation after Mr Zeliang refused to accept their demand that he step down.

However, intervention by New Delhi changed the course of the political scenario in the state within hours on February 17, when 42 MLAs — both NPF and Independent — switched their loyalty in favour of Lok Sabha MP and three-time former CM Neiphiu Rio as the next chief minister of the state.

Mr Rio, who was camping in Kohima and meeting legislators to muster support to take over the reins of power once again, refused to make any comment and said that he was waiting for the NPF Legislature Party meeting on Monday. In a related development, all the legislators camping at a resort in Assam’s Kaziranga National Park also reached Kohima on Sunday after a marathon meeting with Mr Rio.

Though Mr Zeliang was also expected to meet the legislators at Kaziranga, he chose to meet them only in Kohima. Sources close to Mr Zeliang said the chief minister had agreed to a smooth transition of power to Mr Rio in New Delhi, but after his meeting with the NPF president in Kohima and a discussion with some Central BJP leaders, he is believed to have decided to take a chance to create a consensus in favour of NPF president Liezietsu. Both camps was tightlipped about their next moves on Monday.