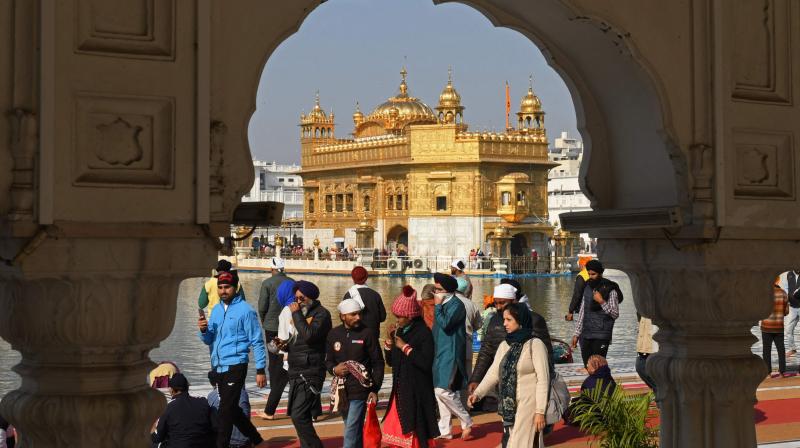 Sikh devotees walk inside the complex of Golden Temple in Amritsar on December 19, 2021, a day after a man was beaten to death for allegedly trying to commit an act of sacrilege at the holiest shrine of the Sikh faith. (Photo: AFP)

Amritsar: Punjab Police is trying to ascertain the identity of a man, who was beaten to death after he allegedly attempted to commit sacrilege inside the sanctum sanctorum of the Golden Temple in Amritsar, and it has been established that he spent a few hours inside the complex.

A case was registered against the unidentified man late Saturday night under IPC sections 295A (deliberate and malicious acts, intended to outrage religious feelings of any class by insulting its religion or religious beliefs) and 307 (attempt to murder), Amritsar Police Commissioner Sukchain Singh Gill said on Sunday.

He said footage obtained from all the cameras at the Golden Temple is being examined to collect information about the accused.

The footage shows that the accused entered the Golden Temple around 11 am on Saturday and slept for a few hours in front of the Akal Takht, the supreme temporal seat of the Sikhs, the police commissioner said.

The incident occurred after 6 pm and he had spent several hours in the Golden Temple before committing the crime, he added.

The man jumped across the railings inside the sanctum sanctorum of the Golen Temple on Saturday evening, picked up the ceremonial sword and reached near the place where a Sikh priest was reciting the holy Guru Granth Sahib.

When he was being taken to the SGPC office, the angry "sangat" (congregation) thrashed him badly, which subsequently led to his death.

Randhawa said he had already spoken to the SGPC president and the Akal Takht Jathedar after the incident.

He said the man was yet to be identified.

"No mobile phone, no purse, no identity card or Aadhaar card was found from him. It has been established that he entered (the Golden Temple complex) around 11 am and remained there for a few hours until the incident," the deputy chieff minister said.

CCTV footage from all the nearby as well as other areas of the city is being scanned to ascertain from where he came to Amritsar and from which location he reached the Golden Temple, Randhawa, who also holds the home portfolio, said.

Gill said the "first focus" is to establish the identity of the man.

"We are scanning the CCTV footage to see which route he took to reach the Golden Temple," he said, adding that photographs of the man have been widely circulated so that he is identified at the earliest.

The police commissioner said the post-mortem examination of the deceased was being carried out and a viscera examination will also be conducted to check if he had consumed any intoxicant.

Randhawa said it is a matter of great sorrow that such an incident took place at the Harmandar Sahib, from where the message of universal communion is conveyed to the mankind.

He said while speaking to SGPC officials, it has been suggested that the SGPC task force should also form its own intelligence wing.

Replying to a question, the deputy chief minister said inimical forces have always tried to disturb Punjab's peaceful atmosphere, but Punjabis have defeated their nefarious designs.

To another query, Randhawa pitched for severe punishment for acts of sacrilege and said the Punjab Assembly had passed bills in 2018 proposing amendments to the Indian Penal Code (IPC) and the Code of Criminal Procedure (CrPC) to make desecration of religious texts punishable with life imprisonment.

Chief Minister Charanjit Singh Channi has ordered a probe into the matter.

"CM @CharanjitChanni strongly condemned the most unfortunate and heinous act to attempt sacrilege of Sri Guru Granth Sahib in the sanctum sanctorum of Sri Harimandir Sahib during the path of Sri Rehras Sahib," the Chief Minister's Office said in a tweet on Saturday night.

Akali Dal stalwart and five-time chief minister Parkash Singh Badal said it was a "heinous attempt", which was "deeply shocking and exceedingly painful".

"Strongly condemn the horrific incident of attempted sacrilege of Sri Guru Granth Sahib Ji at Darbar Sahib. Govt must get to the bottom of what led this man to act in such a despicable manner!" former chief minister Amarinder Singh said in a tweet.