59 petitions on CAA listed; next hearing set for January 22. 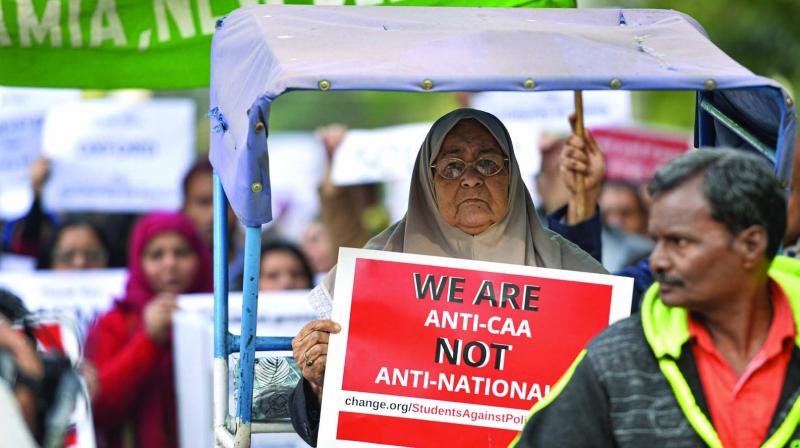 A Jamia teacher displays a placard during a peaceful protest in New Delhi. (Photo: PTI)

New Delhi: The Supreme Court on Wednesday sought response from the Centre on a batch of petitions challenging the constitutional validity of the controversial Citizenship (Amendment) Act that provides for the grant of Indian citizenship to illegal migrants from Pakistan, Bangladesh and Afghanistan belonging to Hindu, Sikh, Buddhist, Jain, Christian and Parsi, but not Muslims.

Seeking response from the Centre, a bench of Chief Justice Sharad Arvind Bobde, Justice B.R. Gavai and Justice Surya Kant fixed January 22, 2020, as the next date of hearing when court would consider the plea for the stay of the Citizenship Amendment law which has been described by the petitioner as being contrary to the provisions of the Constitution.

As senior lawyer Kapil Sibal sought the stay of the CAA, attorney general K.K. Venugopal said that there were four judgments of the top court which have said that a statute under challenge cannot be stalled as there was an assumption of constitutionality in favour of the statute passed by the Parliament.

However, senior counsel Rajeev Dhavan said that the question of staying the CAA does not arise at this stage as the date of its implementation has not been notified yet.

As CJI Bobde said that the court would hear the matter on January 22, 2020, including the plea for the stay, senior counsel Abhishek Manu Singhvi rested the matter saying that they cannot ask for more at this stage.

There were 59 petitions listed before the court. A few of them were supporting the controversial law which has drawn flak from different sections of the society and fuelled protests with students belonging to Jamia Millia Islamia and Aligarh Muslim University taking to the streets.

Broadly the petitioner opposed to the CAA have contended that it is contrary to the principle and promise of secularism in the Preamble of the Constitution, violative of the fundamental rights guaranteeing equality before law (Article 14), prohibition  of discrimination on the grounds of religion, caste, language, color (Article 15) and the right to life guaranteed under Article 21 of the Constitution.

With several pronouncements of the top court, the scope of Article 21 guaranteeing right to life and personal liberty has been immensely expanded and now includes practically all the areas that have a bearing on the human life including clean environment and habitation.

Gazette notification of Citizenship (Amendment) Act was issued on December 12 which said that it would come into force from the date that may be notified by the Central government at a later date.

Starting with Indian Union Muslim League, which was the first petitioner to challenge the Citizenship Amendment Bill the day after it was passed by Rajya Sabha, there have been a spate of petitions challenging the CAA after President Ram Nath Kovind gave his assent to the law.

Petitioners who have challenged the CAA include Congress Rajya Sabha MP Jairam Ramesh, leader of Opposition in Assam assembly Debabrata Saikia, former high commissioner to Bangladesh Deb Mukherjee and former Maharaja of Tripura among others.

He has also contended that the citizenship law under challenge has been enacted “disregarding the report of the Joint Parliamentary Committee dated 07.01.2019 as also the terms of the Accord between AASU, AAGSP and the Central Government on the Foreign National Issue signed on 15.08.1985 (Assam Accord).”

The law under challenge, he has said, creates two classifications on the “basis of religion” and on the “basis of geography”, and both the classifications are “completely unreasonable” and share “no rational nexus” to the object of the amended laws — to provide “shelter, safety and citizenship to communities who in their native country are facing persecution on grounds of religion.”

The AASU has contended that Sections 2, 3, 5 and 6 Citizenship Amendment Act are unconstitutional.

The petition by the leader of Opposition in Assam Assembly Debabrata Saikia says that the amended citizenship law violates the Assam accord.

In a related matter, a BJP leader and top court lawyer Ashwini Kumar Upadhyay urged the court to direct the government to give wide publicity to the “object and reasons” of the Citizenship (Amendment) Act as people who are protesting against it was unaware of the details of the law. He said that he has visited the troubled spots, including Jamia Millia Islamia University and Seelampur area that has a high presence of people who came to India from Bangladesh in early Seventies during its formation.

Describing the request as “unusual”, the court asked attorney general Venugopal if a court order was needed. Mr Venugopal assured the court that no orders were required as it can be done by the government on its own.