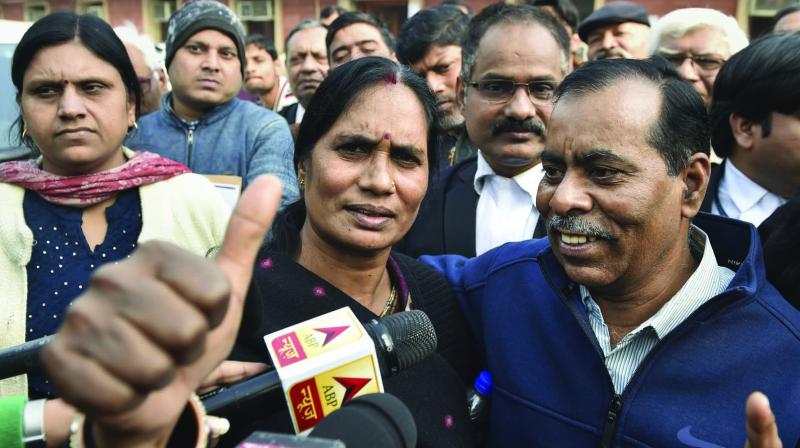 Nirbhaya’s mother after a hearing at the Supreme Court in New Delhi on Wednesday. (Photo: PTI)

New Delhi: The Supreme Court on Wednesday rejected a plea by Akshay Kumar Singh, an accused in the December 2012 Delhi gang rape case and murder case, to reconsider its 2017 verdict upholding the death sentence awarded to him and three others.

Rejecting the plea seeking a review of its May 5, 2017, judgment, a bench of Justice R. Banumathi, Justice Ashok Bhushan and Justice A.S. Bopanna said that no new ground have been raised by the petitioner for reconsideration.

Pronouncing the judgment, Justice Banumathi said that all the contentions in the petition are what was argued before the court in the course of the hearing of the appeals by the four convicts against the high court judgment and were also raised by the other three accused — Mukesh, Pawan, Vinay Sharma — in their plea for reconsideration of death sentence.

Solicitor-General Tushar Mehta, appearing for Delhi government, told the court that there are some crimes for which the “humanity cries” and Nirbhaya case was one of them.

“There are some crimes for which the humanity cries. On that fateful day, God also must have held his head in shame for two reasons. First for not being able to save the innocent girl and second for having created these five monsters,” Mr Mehta said.

God must have held his head in shame on December 12, 2012, for not being able to save the “innocent” victim and for creating these “five monsters”, he added while seeking dismissal of Akshay Singh’s review plea.

On July 9 last year, the court had rejected review petitions of Mukesh, Pawan and Vinay Sharma.

Rejecting the plea, the court had said petitions seeking reconsideration of the May 5, 2017, verdict must show an error resulting in miscarriage of justice.

The four accused — Mukesh, Pawan, Vinay Sharma and Akshay Kumar Singh — were convicted on charges of raping and assaulting a 23-year-old paramedical student inside a bus that led to her death and triggered nationwide protests.

Fifth accused committed suicide in prison while the sixth, a juvenile, has been released after serving his probation period in a remand home.