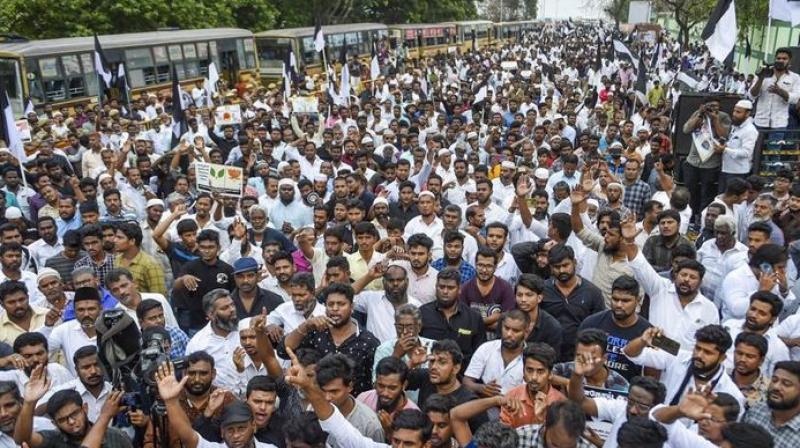 The cities where protests have so far not been disallowed include Mumbai, Chennai, Pune, Hyderabad, Nagpur, Bhubaneswar, Kolkata and Bhopal. (Photo: PTI)

Mumbai: Many protests against the new Citizenship law have been planned in more than 10 cities across the country on Thursday. Prohibitory orders have been imposed in Lucknow and various parts of Karnataka including Bengaluru.

The cities where protests have so far not been disallowed include Mumbai, Chennai, Pune, Hyderabad, Nagpur, Bhubaneswar, Kolkata and Bhopal.

There will be dharnas (sit-in), marches and reading of the Preamble of the Constitution during these protests.

Here is a look at protests being planned:

In New Delhi, a group of 60 NGOs, citizen groups and Opposition parties have come together to oppose the Citizenship Act. Under the aegis of ‘Hum Bharat ke Log’, the programme is supported by all the major Opposition parties including the Congress and the NCP. A march will be organised from the iconic Red Fort to Shaheed Park near ITO (in central Delhi) at 11 am. All the major political parties are likely to participate in it. Left parties will begin their march from Mandi House in central Delhi and join the citizen protest at Shaheed Park led by other groups like AISA and Swaraj India.

In Mumbai, the famous August Kranti Maidan, associated with the Quit India Movement, will host the event on Thursday. Riots Control Police (RCP), Quick Response Teams (QRT) and SRPF will be deployed along with the local police, an official said. Police personnel in plain clothes will also keep a vigil and the crowd will also be monitored using drones and CCTV.

The Left parties too will hold a nationwide protest against the amended citizenship law and the National Register of Citizens (NRC). In a statement, CPI(M) general secretary Sitaram Yechury on Wednesday called on all district committees to mobilise their workers to protest the “unconstitutional moves” of the government.

College students across the country are protesting against the new law, and their agitation has intensified since December 15 over police action against the students of Jamia Milia Islamia in Delhi. The protesters have also taken to social media to wage the battle online. Many people are using platforms like Instagram to educate others about what they see as potential concerns with the new legislation.

In Karnataka and Uttar Pradesh, Section 144 has been clamped to ban large public gatherings. All schools and colleges in Karnataka’s Kalaburagi will remain closed on Thursday.

Starting at 10 am in Bhubaneswar, protests would be held round the clock across cities. Rallies will be held in the country's financial capital at 4 pm, in Chennai at 3 pm, in Bhopal at 2 pm and in Hyderabad at 4 pm. Pune will join in from 4.30 pm.