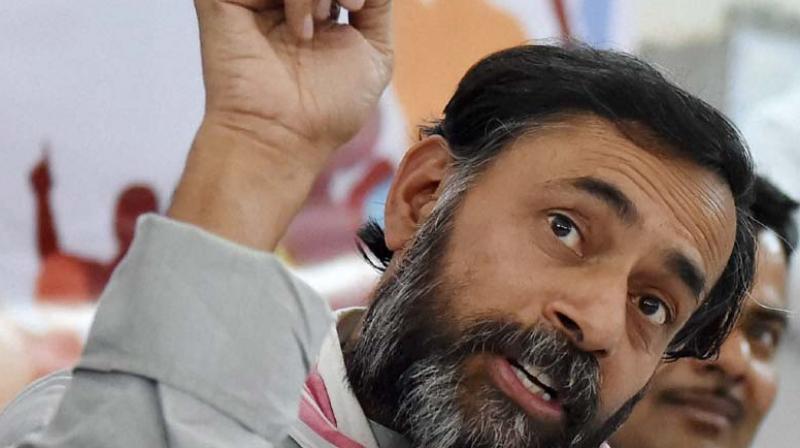 "I have just been detained from Lal Qila. About a thousand protesters already detained. Thousands on the way. Am told we are being taken to Bawana," Yadav tweeted. (Photo: File)

New Delhi: Scores of protesters were detained by the Delhi Police near Red Fort when they tried to take out a march to protest the Citizenship (Amendment) Act in defiance of the prohibitory orders imposed there.

"I have just been detained from Lal Qila. About a thousand protesters already detained. Thousands on the way. Am told we are being taken to Bawana," Yadav tweeted.

It is an honour to be detained on 19th of December, a small tribute to Ashfakulla Khan and Ramprasad Bismil.
Happy to be in the company of Dr Dharamvir Gandhi, ex-MP, Patiala pic.twitter.com/odFCzMJQNf

“It is an honour to be detained on 19th of December, a small tribute to Ashfakulla Khan and Ramprasad Bismil. Happy to be in the company of Dr Dharamvir Gandhi, ex-MP, Patiala,” he added.

Protesters, which included activists and students, were dragged into buses in a bid to clear the area. Holding placards and shouting slogans, the protesters allowed themselves to be escorted to the buses.

"Picked up by Delhi Police from Red Fort. We had gathered to protest against the divisive CAB-NRC on Ashfaq & Bismil's martyrdom day. I appeal to all peacefully keep protesting till unconstitutional CAB-NRC is rolled back. This is something we owe to Ashfaq & Bismil's sacrifice," Khalid tweeted.

The Delhi Police has urged protesters to go to the designated place for their protest.

"We urge people not to listen to any rumours. Section 144 has already been imposed in the area. Please cooperate with the Delhi Police," said Deputy Commissioner of Police (Central) Mandeep Singh Randhawa said.

Several Jamia students and activists were also sitting inside the Jamia Masjid complex to protest against the CAA and National Register of Citizens (NRC).

"If you have a memo of demands, give it to me. We have implemented Sec 144. If anti-social elements try to breach peace, you people won't be able to control it," Additional Commissioner of Police (Crime) Ajit K Singla told a group of protesters at Red Fort here.

What is the harm in protesting peacefully, a protestor asked.

"Every time we gather to protest against CAB and NRC, police detain some of the protesters so that we start focusing on getting them released," said Shakib (29).

Several people have been stopped at Turkman Gate as well, protestors claimed.

"Police have divided the protesters. Thousands of people started moving towards Red Fort from different directions, including Daryaganj, Turkman gate and Jama Masjid, at 10 am. Some protesters, who could reach Chandni Chowk, were baton-charged, forced into buses and taken to Bawana. We were stopped in between, were not allowed to move forward," Amjad, one of the protestors, said.