India   All India  19 Dec 2017  Virbhadra Singh and Dhumal: A tale of two captains, their wins and losses
India, All India

Virbhadra Singh and Dhumal: A tale of two captains, their wins and losses

Winning and losing, the two leaders have probably realised, are but two sides of the same curious coin. 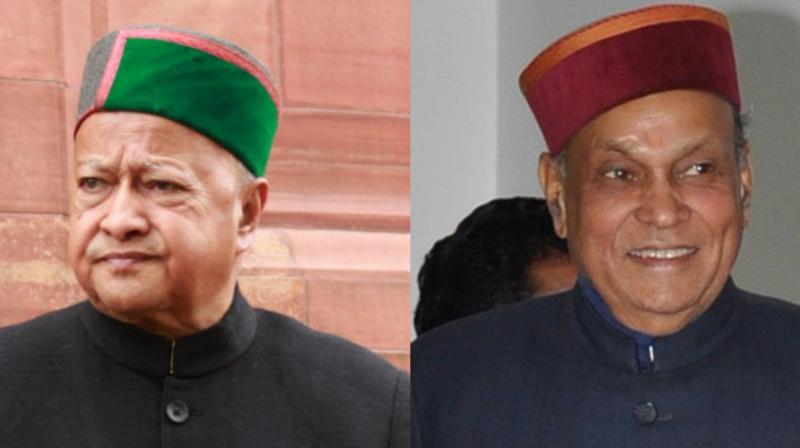 New Delhi: It’s a classic case of a captain scoring a century despite his side losing and the opposing team registering a huge win but its skipper getting out for a duck.

The Himachal Pradesh electoral ground is no cricket pitch but the ale of victory and defeat is one that Congress’ chief minister Virbhadra Singh and BJP’s Prem Kumar Dhumal will surely identify with.

Winning and losing, the two leaders have probably realised, are but two sides of the same curious coin. While Congress leader Virbhadra Singh won his seat, his party lost the state. And, in a neat flip, the BJP wrested the state from the Congress but its chief ministerial candidate Dhumal was trounced.

Both are Thakur leaders, both are former chief ministers, both were hoping for another stint at leading the state. But the chief minister’s chair has evaded both this election.

While the BJP was poised to win 44 of 68 seats, the Congress was likely to get 21 seats.

Mr Singh, a six-time chief minister, a scion of the Rampur-Bushahr royal family, and often called ‘rajaji’ for his royal lineage, registered a win from Arki despite the Congress receiving a drubbing.

Mr Dhumal, a two-time chief minister who belongs to a farmer family, lost from Sujanpur to friend-turned-foe Rajinder Rana though his party won a decisive victory in the hill state.

As Mr Dhumal and Mr Singh slugged it out, both also faced multiple hurdles at the party level.

Party leaders like Anil Sharma, who was minister in Mr Singh’s cabinet, quit the Congress just before the polls to join the BJP.

On the contrary, the BJP’s campaign was led by Prime Minister Narendra Modi with a series of senior BJP leaders and central leaders canvassing for votes.

However, a soft-spoken Dhumal, 73, party insiders said, was upset over the party shifting him from his Hamirpur bastion to adjoining Sujanpur.

It was only a few days before the elections that the BJP declared him the party’s face for the polls. The septuagenarian leader led his party to victory but could not win his own seat. According to political observers, the two ageing stalwarts are witnessing the rise of the younger generation and a changing political dynamic.

Mr Singh is believed to have an uneasy relationship with Gandhi while Dhumal has to compete with younger faces like Union health minister J.P. Nadda. Victory may not always be sweet.