There’s hope for 2019 in Congress’ defeat

Rahul Gandhi even managed to annoy and exasperate the BJP with his regular visits to temples in Gujarat. 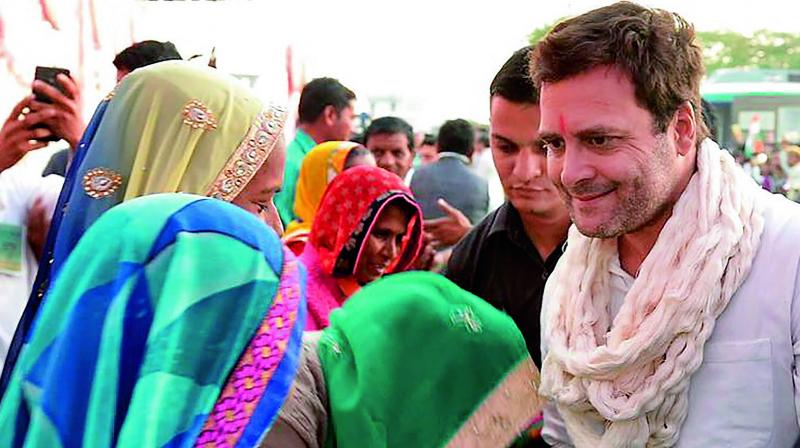 New Delhi: Despite the Congress’ defeat at the hands of the Bharatiya Janata Party in both Gujarat and Himachal Pradesh, there’s gnawing worry in the BJP camp over its victory, and kindling of nervous hope in the Congress’ loss.

The fact that the Congress was not just able to increase its tally and voteshare significantly in Gujarat, the home state of Prime Minister Narendra Modi and BJP president Amit Shah, but that it also stopped the BJP from hitting the 100-mark after boastful claims of “150 seats”, has catapulted Rahul Gandhi, the new Congress president often referred to as “Pappu” by BJP trolls, to become the main challenger to Mr Modi in 2019 Lok Sabha elections.

That Gujarat’s results — where the Congress has won the largest number of seats since 1985 — came just two days after Mr Gandhi’s elevation to the party’s top post has, naturally, enthused the Congress’ cadres and leaders.

“Congress has done brilliantly. Our strength has increased. Morally, it has been a brilliant intervention of Rahul Gandhi,” Renuka Chowdhury, Lok Sabha MP, said.

Over the last three months, Mr Gandhi led the Congress’ campaign in Gujarat from the front, making 16 trips to the state and campaigning across 135 Assembly constituencies. Neither Priyanka Gandhi nor Sonia Gandhi addressed any rally or even visited Gujarat.

Mr Gandhi campaigned aggressively, setting the agenda for the political discourse, and never once deviated from his script which remained focused on the lack of development in Gujarat,  agrarian distress, unemployment, disruption caused by demonetisation and the hasty implementation of GST.

This was surprising given that since 2014, the BJP has been setting the agenda for all poll campaigns, with the Congress being forced to respond to it, mostly in the defensive.

Mr Gandhi even managed to annoy and exasperate the BJP with his regular visits to temples in Gujarat, a move seen by many as a shift from its secular ideology, but by others as a pragmatic repositioning of the party to counter the Hindutva brigade’s claim over a jingoistic variety of nationalism.

In spite of provocation and personal attacks by the BJP, Mr Gandhi exhorted the Congress leadership and cadres not to respond in kind. In fact, in an uncharacteristically quick reaction for the Congress, he suspended Mani Shankar Aiyar from the party on the same day when his “neech addmi” comment brought new vigour to the BJP’s campaign.

The social media too, till now the stronghold of saffronites and “Modi bhakts”, was stirred by the sudden ramping up of the Congress’ presence.

From the haranguing “one question a day” to Mr Modi series, which appeared daily with the tagline “22 saal ka hisab, Gujarat maange jawab” (22 years of account, Gujarat demands answers), to tackling questions about who tweets for him with disarming humour, Mr Gandhi was able to effectively challenge the Prime Minister’s clout on Twitter.

In October, Mr Gandhi tweeted a video of his dog doing a biscuit trick with this text: “People (have) been asking who tweets for this guy... I’m coming clean... It’s me... Pidi... I’m way smarter than him. Look what I can do with a tweet… oops… treat! (sic).”

The self-deprecation and a touch of the personal was a breath of fresh air. As was his candid response to a question about dynastic rule at the University of California in Berkeley in September.

Mr Gandhi’s political acumen was apparent in the crucial alliances he stitched together with Hardik Patel, the firebrand leader of angry Paridars, dalit rights activist Jignesh Mewani, and OBC leader Alpesh Thakore, young leaders who mobilised thousands of people in their anti-BJP rallies.

Admittedly, this is all too little for a 47-year-old scion of the Gandhi family, nurtured to and now leading the country’s grand old party.But for the fact that the Congress’ Asha Patel on Monday beat the BJP’s candidate in Unjha Assembly constituency in Mehsana district, which includes Mr Modi’s hometown, Vadnagar, with a margin of 19,000 votes.

With Gujarat results, it’s clear that a self-assured Mr Gandhi is stepping out of the shadow of his mother with energy and enthusiasm that the Congress desperately needs. If Mr Gandhi is able to sustain it, without embarking on personal trips during important political developments, he may well be able to mount a challenge to the BJP in the next round of Assembly elections in 2018, and to Mr Modi’s prime ministership in 2019.