Many felt this could be the last electoral battle for Dhumal as he is just two years short of the BJP’s unofficial age bar of 75. 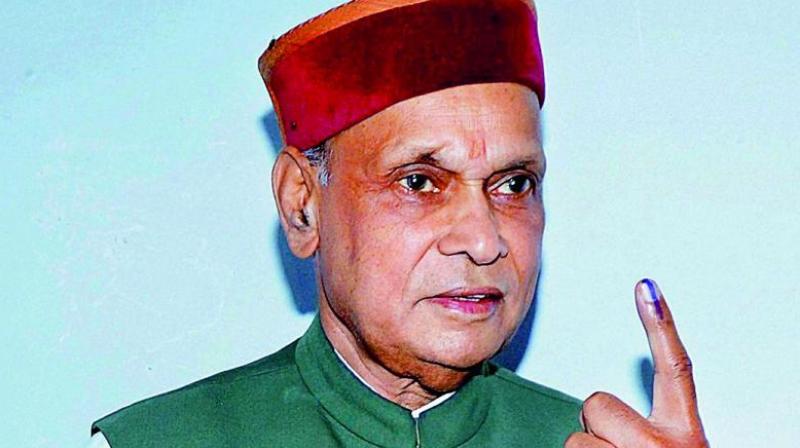 New Delhi: It was a bittersweet victory for the BJP in Himachal Pradesh, where it came back to power but its chief ministerial candidate and stalwart Prem Kumar Dhumal lost to his one-time protégé Rajendra Singh Rana of the Congress. Prof. Dhumal contested this time from a new constituency, Sujanpur, against a “popular” opponent who is well known for his social work in the area.

Many felt this could be the last electoral battle for Prof. Dhumal as he is just two years short of the BJP’s unofficial age bar of 75. All eyes are now on the party leadership, which will take a call on who will be chief minister. The names of Union minister J.P. Nadda and senior leader Jairam Thakur have started doing the rounds in the state as the party’s parliamentary board appointed Union ministers Nirmala Sitharaman and Narendra Singh Tomar as central observers for the legislature party meeting to chose its new leader.

Many felt internal strife was one of the main reasons for Prof. Dhumal’s defeat as some factions within the BJP were miffed over him being declared the party’s face in the hill state. Some even claimed it was hard for Prof. Dhumal to defeat Mr Rana, who had learnt all the political tricks from him. The party leadership had also announced his name just a few days before the state went to the polls as factionalism in the state unit is something the BJP leadership has been battling for many years now.

Prof. Dhumal, who shares a good personal rapport with Prime Minister Narendra Modi, was asked by the BJP leadership to contest from a new Assembly seat and not from his traditional seat of Hamirpur. The BJP’s poll managers suggested to Prof. Dhumal that after doing caste calculations and considering various factors he should contest from a new seat.  Those close to the former CM claimed that there was a “bhitarghaat” (internal sabotage) within the party against him as he not only lost but also his relative and eight-time MLA Gulab Singh Thakur lost his Jogindernagar seat. Another relative of his, Ravinder Ravi, also lost in Dehra to an Independent candidate. The BJP also lost Barsar seat in Hamirpur district to the Congress. The Hamirpur region is considered a stronghold of the Dhumal family. His elder son, Anurag Thakur, is an MP from the Hamirpur parliamentary constituency.

Accepting his defeat, Prof. Dhumal said the “personal loss is not of much importance” and the gain that victory brought to the BJP was important. Also, Varinder Kanwar, who won from Kutlehar in Una district, offered to vacate his seat for Prof. Dhumal. “Thankful to the people of the state for voting for the BJP. In politics, sometimes one wins, sometimes one loses. I was not expecting to lose. I will do an analysis,” said the BJP’s CM candidate as he congratulated the winners and party workers for the spectacular victory in the Assembly elections.