Sensing that demonetisation and GST had hit the party hard in Gujarat, the ruling party is expected to go soft on reforms, sources said. 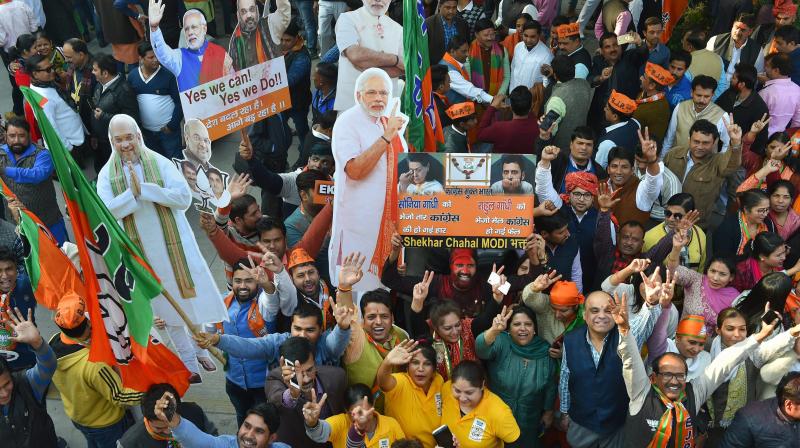 BJP workers celebrate with the cut-outs of Prime Minister Narendra Modi and party president Amit Shah at the party headquarters in New Delhi on Monday, after the party's victory in the Assembly elections in Gujarat on Himachal Pradesh. (Photo: PTI)

New Delhi: With its victories in Gujarat and Himachal Pradesh, the BJP led by Prime Minister Narendra Modi has continued its winning streak. But its win by a slender margin in the Prime Minister’s home turf of Gujarat has put the party back into introspection mode.

Sensing that demonetisation and GST had hit the party hard in Gujarat, the ruling party is expected to go soft on reforms, sources said. The RSS and a major section of the BJP had begun nudging the government to settle the Ram Mandir dispute and build a “magnificent Ram temple” in Ayodhya before the 2019 general election.

It was learnt that after Monday’s results, the contentious Financial Resolution and Deposit Insurance Bill may not be introduced in Parliament even in the Budget Session. The “bail in clause” in FRDI had evoked angry reactions. Analysts have argued that the “bail in clause” meant that creditors and depositors were expected to absorb losses in case of a bank failure. This had raised concerns that ordinary citizens may have to bail out banks with their hard-earned savings in case a bank goes under. Despite the government’s attempts to allay such concerns, the entire controversy refuses to die down.

Another proposed reform which could get hit is linking property with Aadhaar to curb black money in real estate. The government has already been forced to extend the deadline to link Aadhaar with bank accounts, mobile phone connections and financial instruments to March 31, 2018. Some analysts are warning that it could be the next major thing to hit the economy after demonetisation and GST — as a huge number of people have not yet linked their financial instruments with Aadhaar. Also, concerns are growing over the inconvenience that failure to link bank accounts, insurance policies, mutual funds and other instruments could cause to people. The BJP analysts have cautioned the government that these could have an adverse impact in the 2019 general election.

Sources said the government may move at breakneck speed now to settle the Ayodhya dispute and set up the Ram Mandir. This move is likely to consolidate the Hindu votebank, cutting across caste lines. The BJP and RSS believe the Ram Mandir remains an “emotive issue” for “Hindus in Bharat (India)”.

The saffron party’s rivals feel that after the BJP’s “poor performance” in Gujarat, it “will go full steam ahead to polarise the nation”, and also push the “triple talaq bill”. A saffron leader said while a majority of “Muslim men will continue to vote against the BJP, the bill will get us women’s votes”. Also, the party is expected to go louder over issues related to nationalism and jingoism.

Congress president Rahul Gandhi, who managed to give PM Modi and BJP president Amit Shah a real scare and has set his party in revival mode, cannot afford to let the momentum slip now. Congress insiders feel Mr Gandhi will continue with his soft Hindutva approach as it bore results in Gujarat. The Gujarat verdict will also help the Congress secure a broad coalition for the 2019 general election if the party manages to perform in the coming polls in Madhya Pradesh, Rajasthan, Karnataka and Chhattisgarh in 2018. Mr Gandhi is likely to “nurture” and promote leaders in the states, that could provide new faces in the coming Assembly polls. “Like Amit Shah and Modi, Rahul Gandhi has to transform himself into a political animal,” a senior party leader said.