PM assured the people that all help will be provided to them, the Govt stands shoulder to shoulder with them in this hour of crisis. 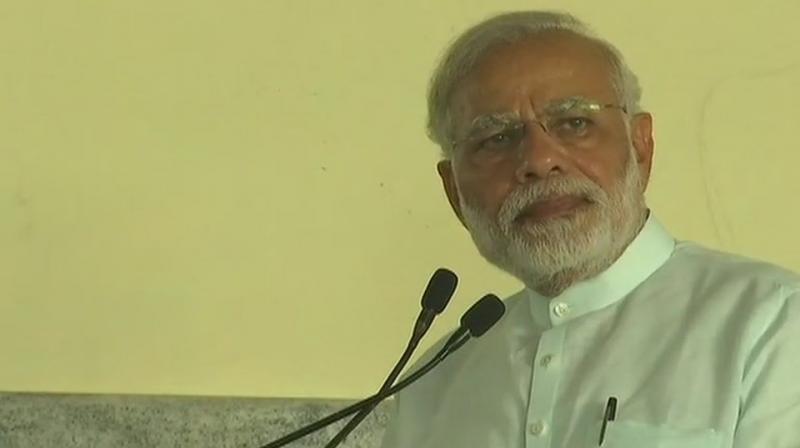 Prime Minister said that the Union Government will support the cyclone-affected States through a package of relief measures. (Photo: ANI | Twitter)

After visiting cyclone hit Kerala, Tamil Nadu and Lakshadweep, the Prime Minister said that the Union Government will support the cyclone-affected States through a package of relief measures.

PM Modi said that Centre will support the #CycloneOckhi -affected states through a relief package. The Centre will give financial assistance worth Rs. 325 crore to Kerala, Tamil Nadu and Lakshadweep. pic.twitter.com/duFO6w5fVc

The Centre will dispatch immediate financial assistance worth Rs 325 crore to cater to the requirements of Kerala, Tamil Nadu and Lakshadweep. The financial assistance announced by the Prime Minister today, is over and above the assistance of Rs 280 crore to Tamil Nadu, and Rs 76 crore to Kerala, disbursed earlier this month, after Cyclone Ockhi hit the two States/UTs (Union Territories).

The Government of India will also support the reconstruction of approximately 1400 houses fully damaged due to Cyclone Ockhi, on priority, under the Pradhan Mantri Awas Yojana (PMAY). Under this programme, each beneficiary will get up to Rs 1.5 lakh as support for building a new house.

Insurance companies have also been advised to pay the insurance claims of people affected by Ockhi cyclone expeditiously.

An ex-gratia assistance of Rs 2 lakh to the next of kin of the deceased, and Rs 50,000 to each of those seriously injured due to the cyclone have been sanctioned under the Prime Minister's National Relief Fund (PMNRF).

Earlier in the day, Prime Minister Modi met and interacted with people, including fishermen and farmers, affected by Cyclone Ockhi, during a visit to the cyclone affected areas of Lakshadweep, Tamil Nadu and Kerala.

In the course of the day, Prime Minister Modi interacted with people in Kavaratti, and Kanyakumari. He also visited Punthura village near Thiruvananthapuram, which is one of the villages that faced the impact of the cyclone. People explained to him, the hardships faced by them on account of the cyclone.

PM Narendra Modi meets families affected by #CycloneOckhi in Kerala's Poonthura, says, 'govt will do everything possible to bring back the missing people' pic.twitter.com/oqR0Ix35FW

The Prime Minister assured the people that all help will be provided to them and that the Union Government stands shoulder to shoulder with them in this hour of crisis.

He held separate detailed review meetings on the current situation and relief measures, at Kavaratti, Kanyakumari and Thiruvananthapuram. The Governors, Chief Ministers of Kerala and Tamil Nadu, Deputy Chief Minister of Tamil Nadu, Deputy Speaker of Lok Sabha, and Administrator of Lakshadweep along with senior officials were present at the respective meetings.

Earlier, during the review meetings, Prime Minister Modi was briefed on the impact of Cyclone Ockhi, the third major cyclone of this kind, to hit this area in the last 125 years.

The cyclone hit on November 30, 2017, and the search and rescue operations, began the same day. So far, a total of 197 ship days involving 20 surface platforms and about 186 flying hours have been utilised by the Indian Coast Guard for search and rescue operations. In addition, a total of 156 ship days and 399 flying hours, involving 10 ships and 7 types of aircraft have been utilised by the Indian Navy. A total of 183 fishermen and civil administration personnel were carried on board these ships to aid in the rescue operations. A total of 845 fishermen have been rescued or assisted till date.

The Prime Minister was informed that the surveillance was carried out even beyond 700 nautical miles from the shore.