Amit Shah rejected suggestions that the contest with Congress in Modi’s home state was a “close fight”. 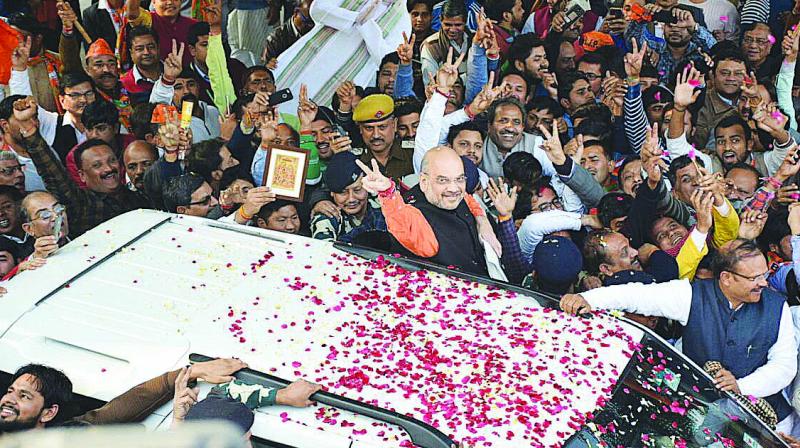 BJP president Amit Shah flashes victory sign as he is welcomed on his arrival at the party headquarters in New Delhi on Monday, after the party’s victory in the Assembly elections in Gujarat and Himachal Pradesh. (Photo: Bunny Smith)

New Delhi: The BJP failed to achieve its “Mission 150-plus” target in the 182-member Gujarat Assembly on Monday and the party blamed it on the “divisive politics” and the “low level” of Opposition’s campaigning.

BJP president Amit Shah, who had set the target and camped in his home state for more than a month overseeing the preparedness and strategy, said that his party was at the “receiving end” of the Congress’ “low level” campaign. However, within the BJP many admitted that Rahul Gandhi-led Congress’ aggressive campaign, troika of Hardik Patel-Jignesh Mevani-Alpesh Thakor and GST were also factors that led to the ruling party’s decreased tally.

As the election results showed the BJP achieving a nail biting finish, Mr Shah claimed that its politics of performance won over Opposition’s dynastic politics, casteism and appeasement politics.

“When I said 150 seats, I didn’t factor in Congress’ low-level campaign. This is a victory of development over dynasty and polarisation,” he said. Mr Shah asserted that election results of Gujarat and Himachal Pradesh have proved that  democracy has entered a new era and predicted that the BJP under Prime Minister Narendra Modi will continue the “Vikas Yatra” and “Vijay Yatra” in 2019 as well.

Though the BJP’s vote share in Gujarat increased marginally from 47.9 per cent in 2012 to 49.1 per cent now, Mr Shah asserted that the party has improved its position across the country since 2014 and has now formed governments in 19 states, including five ruled by the NDA.

Mr Shah rejected suggestions that the contest with Congress in Mr Modi’s home state was a “close fight”. “An eight percent difference in vote share between the two parties cannot be seen as kante ki takkar (close fight),” he said, referring to Congress’ vote share of 41.1 per cent.

To a question on what the BJP learnt from the campaign, Mr Shah said that the saffron party will have to consider the Congress’s “new system” of campaigning in its election strategy from the next time.

Earlier, when asked if the Congress gave it a tough fight, Union minister Smriti Irani said, Jo jeeta, wohi Sikandar (whoever wins is the king).”