Gain of 16 seats in Gujarat gives Rahul Gandhi a shot of credibility. 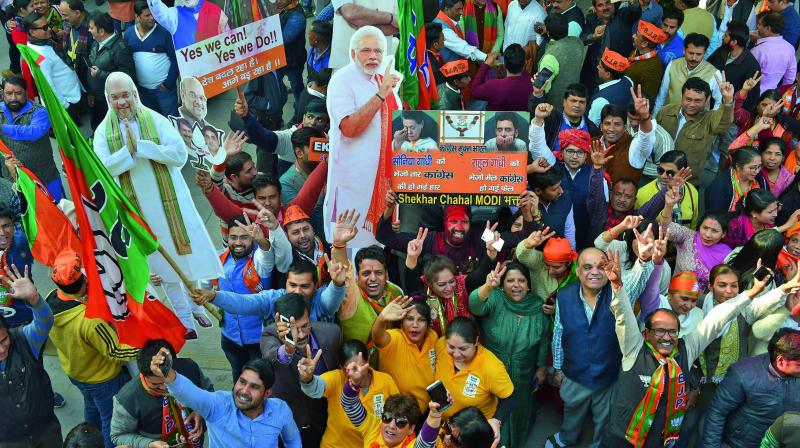 New Delhi: If the BJP’s mascot, Prime Minister Narendra Modi, snatched victory from the jaws of defeat, Gujarat poll results came as a major boost for the newly-elected Congress president, Rahul Gandhi. In the much hyped fight between Mr Modi and Mr Gandhi, the latter even in defeat ended on the top by showing he could stand up to the invincible and mighty Mr Modi. The narrow victory margin also served a blow to the BJP and the Prime Minister’s main propaganda plank — the “Gujarat model.”

In the 182-strong Gujarat Assembly, the BJP’s failure to touch triple-digit and scraping through by securing 99 seats (92 is the magic figure) has virtually rattled the saffron pundits.

As per the latest trends, the Congress won 77 seats. With Gujarat and Himachal victories, the BJP now rules in 19 states,  (including five states which have NDA governments). This is the BJP’s sixth straight win in Gujarat. As for voteshare, the BJP secured nearly 49.1 per cent votes, down from nearly 60 per cent in 2014, but somewhat higher than nearly 48 per cent it polled in the 2012 state Assembly polls.

The Congress’ voteshare was around 41.4 per cent, up from 33 per cent in the 2014 Lok Sabha elections and also higher than the 39 per cent the party secured in the 2012 Assembly polls

Regardless celebration and chest thumping, the narrow victory margin in Gujarat was a rude awakening for the BJP. Confident of a massive win in the Prime Minister’s home turf, party president Amit Shah had set a lofty target of 150 seats in Gujarat. Crawling to breast the tape with a margin of seven seats was also being viewed as a dent to the appeal and charisma of PM Modi. Mr Modi had addressed 41 rallies in Gujarat, his highest in the state so far. 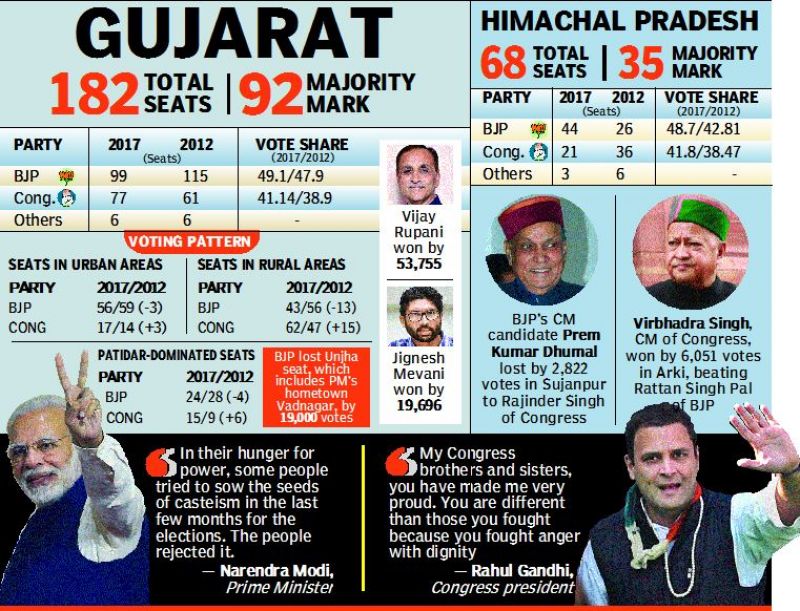 The BJP’s seat tally in the legislative Assembly has come down by nearly 14 seats from the last Assembly elections and 26 seats from its 2002 tally. As for the Congress, the party was up by 19 seats. It may be recalled that the Congress failed to win a single seat from Gujarat in the 2014 Lok Sabha elections, with all 26 parliamentary constituencies falling in the BJP’s kitty.

Saffron insiders revealed that demonetisation, GST, agrarian issues including MSP of cotton and groundnut impacted the party in Saurashtra, which has a large agricultural belt, and most of the rural areas. To make matters worse, the rebellion of the Patidar community and nearly 50 per cent of dalit votes shifting to the Congress also hit the party hard. Describing the Congress as a “faceless party” failed to have the desired impact because of Mr Gandhi’s aggressive campaign, insiders pointed out.

After elections in UP, Punjab, Goa, Himachal Pradesh and Gujarat, the battleground will now shift to Madhya Pradesh, Rajasthan, Chhattisgarh and Karnataka. The outcome of the 2018 polls in these states would be crucial for the final showdown in 2019.

The narrow win in Gujarat could make things difficult for saffronites to secure a comfortable win in the ruling states like Madhya Pradesh and Rajasthan.

In Rajasthan, the Congress is already on the upswing. Also, unlike Gujarat in Karnataka, the Congress has a strong CM candidate in Siddaramaiah.

If Mr Gandhi manages to perform in 2018, a strong Congress can also become the nucleus around which all other non-BJP regional parties can gather. After JD(U) leader Nitish Kumar’s shift to NDA, non-BJP parties were on the hunt for a credible face. If Mr Gandhi pulls through, the possibility of him emerging as the main Opposition cannot be ruled out.