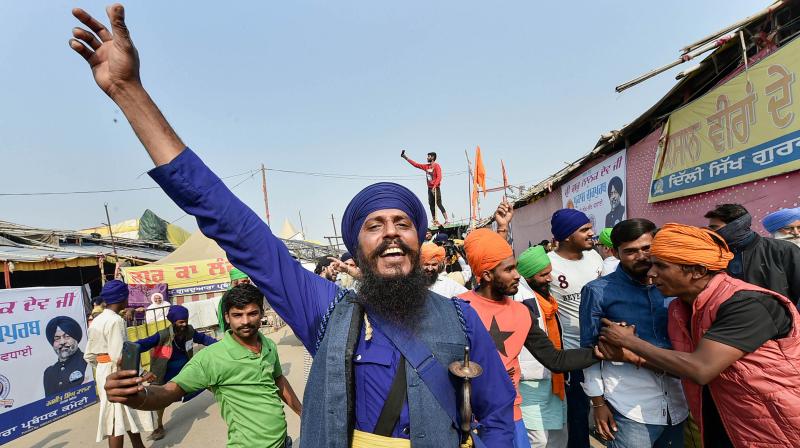 New Delhi: Prime Minister Narendra Modi on Friday announced that the government has decided to repeal the three farm laws, which were at the centre of protests by farmers for the past year, and appealed to the protesting farmers to return home.

Addressing the nation on the auspicious occasion of Guru Nanak Jayanti, Modi insisted that the laws were in the benefit of farmers and then apologised to people of the country while adding that the government could not convince a section of farmers despite its clear heart and clean conscience.

"There may have been some shortcoming in our efforts due to which we could not explain the truth, as clear as the light of the diya, to some of our farmer brothers," he said.

Noting that it is the birth anniversary of Guru Nanak Dev, he said it was no occasion to blame anyone.

"I would request all my protesting farmer friends, today is the auspicious day of Guru Purab, return home, to your fields and family and make a new beginning, let us move forward afresh," he said.

The goal of the three farm laws was to empower farmers, especially small farmers, the prime minister said.

He listed various steps taken by his government for the welfare of small farmers and pointed out that the agriculture budget has risen by five times with over Rs 1.25 lakh crore being spent annually.

Modi said that he had seen the challenges faced by farmers very closely in his five decades of public life and therefore when the country gave the opportunity to serve as 'Pradhan Sevak' in 2014, he gave top priority to agriculture development and farmers welfare.

The Centre, which has held 11 rounds of formal dialogue with the farmers, had maintained that the new laws are pro-farmer, while protesters claim they would be left at the mercy of corporations because of the legislations.

The ruling BJP will hope that the decision to repeal the three laws will cancel out the political headwinds it has encounters in Punjab and western Uttar Pradesh, two states which are going to the polls early next year.

The decision will also help former Punjab chief minister Amarinder Singh in sealing his expected alliance with the BJP for the polls.

Many farmers had been protesting and were encamped at Delhi's borders since November 2020 with a demand that the Farmers' Produce Trade and Commerce (Promotion and Facilitation) Act, 2020, Farmers' (Empowerment and Protection) Agreement on Price Assurance and Farm Services Act, 2020 and the Essential Commodities (Amendment) Act, 2020 be rolled back and a new law made to guarantee MSP for crops.

It also said that the SKM will take note of all developments and will hold its meeting soon and announce further decisions.

"Samyukt Kisan Morcha welcomes this decision and will wait for the announcement to take effect through due parliamentary procedures," the SKM said in a statement.

The farmers' body said if the farm laws are formally repealed, it will be a historic victory of the one-year long farmers' struggle in India.

"The agitation of farmers is not just against the repeal of the three black laws, but also for a statutory guarantee to remunerative prices for all agricultural produce and for all farmers. This important demand of farmers is still pending," it said.

The SKM added that the demand of the withdrawal of the Electricity Amendment Bill is still pending.

Thousands of farmers from Punjab, Haryana and Uttar Pradesh under the aegis of various farmers unions have been protesting at the borders of the national capital since November 26 last year to demand repeal of the three farm laws.

The farmers' body said that nearly 700 farmers have been martyred in this struggle.

"The central government's obstinacy is responsible for these avoidable deaths, including the murders at Lakhimpur Kheri, SKM said in a statement.

"It is a good move by Prime Minister Narendra Modi on the occasion of Gurupurab," Joginder Singh Ugrahan, the leader of BKU's Ugrahan faction, told PTI.

On the prime minister's appeal to protesting farmers to return to their homes, Ugrahan said, "Farmers' unions will sit together and decide the future course of action."

BKU(Ugrahan) is the largest among the all protesting farmers unions and are protesting at the Tikri border. Ugrahan faction of the BKU has sizeable presence across Punjab.