India   All India  19 Nov 2019  Have studied Sanskrit all my life, but now I am a Muslim: BHU's Firoze Khan
India, All India

Have studied Sanskrit all my life, but now I am a Muslim: BHU's Firoze Khan

It has been 12 days since he landed in Varanasi to take charge of his duties, but has not taken a single class yet. 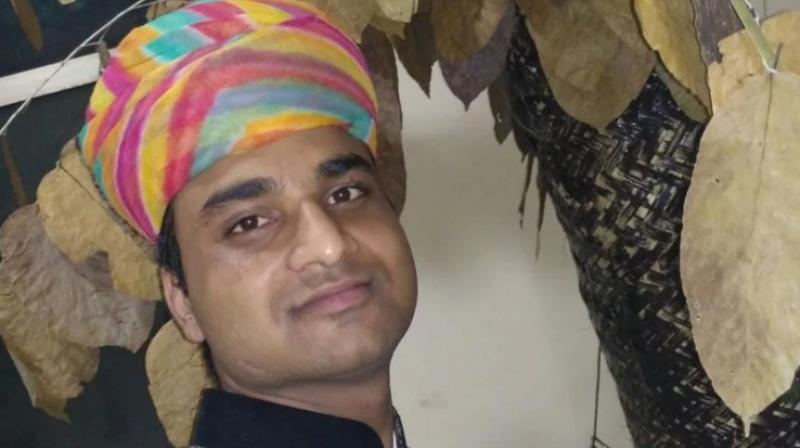 Khan is distraught by protests, yet is hopeful that the situation would change and his students would come around soon. (Photo: Facebook)

Varanasi: Firoze Khan, 28, who is from Jaipur district in Rajasthan, was excited to take up his new job as an assistant Sanskrit professor at Uttar Pradesh’s Banaras Hindu University.

It has been 12 days since he landed in Varanasi on November 7 to take charge of his duties as a professor, but has not taken a single class yet.

"All my life, I learnt Sanskrit and I was never made to realise I am a Muslim, but now when I am trying to teach, suddenly it has become the only subject." Firoze Khan told The Indian Express.

Khan is a doctorate in Sanskrit and was welcomed to his new workplace amid protests and anti-appointment chants.

“I remember the students had gathered when I arrived at BHU on November 7 for my joining, but they did not say anything to me,” Khan, who invited glares from protesting students, was quoted as saying to The Quint.

A section of the BHU's students has been protesting to Khan's appointment, for the only reason that he is a Muslim.

According to the students, Khan's appointment goes against the inscription on a foundation stone laid down by the BHU founder Madan Mohan Malviya in the department, which read that Hindus and followers of Jainism, Buddhism and the Arya Samaj, were only allowed entry into it, The Hindu reported.

On Monday, a 'hawan kund' was set up and around 20 Sanskrit Vidya Dharma Vijnan (SVDV), a faculty of BHU, students staged a sit-in outside the BHU vice chancellor's office to protest his appointment.

Khan is distraught by protests, yet is hopeful that the situation would change and his students would come around soon.

“I started learning Sanskrit since Class 2, but no one ever pointed this out even though my mohalla in Bagru (30 km from Jaipur) had 30 per cent Muslims. Neither the local maulavi nor society. In fact, I don’t know as much Quran as I know Sanskrit literature. Prominent Hindus in my area praised me for my knowledge of Sanskrit and its literature despite being a Muslim,” Khan told The Indian Express.

He completed his Shastri (Bachelor degree), Shiksha Shastri (B.Ed), Acharya (post-graduate) and received his Ph.D in 2018 from Rashtriya Sanskrit Sansthan, a deemed university, in Jaipur. Khan has also cleared NET and JRF. His father Ramzan Khan too is a graduate in Sanskrit.

Krishna Kumar, a research student at SVDV, who is one of the prime protester said: “If a person is not connected with our feelings and culture, how will he be able to understand us and our dharma''.

The BHU administration on Friday backed the appointment of a Muslim professor, saying it is committed to provide equal opportunities to everyone irrespective of religion, caste, community or gender. However, it seems that administrations' words were not strong enough to compel students to accept the Muslim professor.

Khan, however, has been undertaking efforts to explain to students that teaching has nothing to do with religion.

“To students who are protesting with an argument that how can I teach Hinduism when I am a Muslim, I want to say that in Sahitya department, we have to study about the technicalities of Sanskrit literature and famous dramas like Abhigyan Shakuntalam, Uttar Ramcharitam or Mahakavya like Raghuvansh Mahakavya or Harshcharitam and all this has nothing to do with religion,” he said.

“At one point I can agree that if I have to teach Vedas, Dharam Shastra or Jyotish then its better I am a Hindu but teaching Sanskrit Sahitya has nothing to do with it. All I have to teach what is written over there,” he added.

Students from some other departments and other faculty members find the protests meaningless and demanded arrest of the students who are disrupting the tranquility of the campus.

Mahesh Prasad Ahirwar, Professor of Ancient History, Culture and Archaeology backed Khan's credentials and said the university had nothing to do with caste and religion.

“Those who were oppressed earlier are now coming and showing their ability. This is the changing India: whoever is capable has the right to teach in BHU. I feel that those who oppose this should be punished as per law,” he said.

The vice-chancellor and other senior officials had on Thursday held discussions with representatives of the protesters for over two hours.

The vice-chancellor assured the students that the administration is committed to achieving the objectives of the university in providing equal educational and teaching opportunities to everyone irrespective of religion, caste, community or gender.

When arrived at Varanasi, Khan was the excitement of being selected as a faculty at BHU, one of India’s most prestigious universities apart, however, now it has plummeted to nervousness.

Now, he don't know what to do. When asked if he will fight to be here and teach the students, he answered by saying that it totally depended on the environment that follows. If it is one of inclusiveness, questions like this won’t arise. “Whatever they have in their heart, I hope I can change that,” he said.