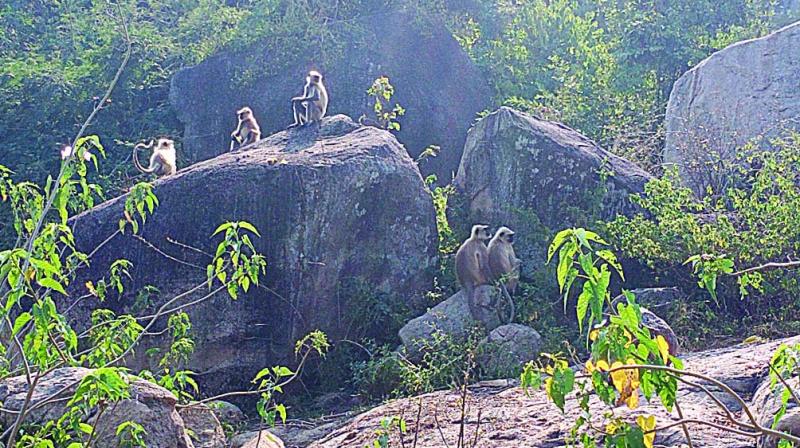 Bhopal: An operation has been launched to evacuate a troop of around 100 langur monkeys “trapped” in a hill inside Dudhwa reservoir in Chhattisgarh’s north Bastar district of Kanker for the last two months.

The local forest department has started building a 300 meter-long bamboo bridge to connect the lush green hill, spread in around 15 hectares, to the bank of the reservoir to facilitate their movement of the simians to the land, a senior forest officer posted in Kanker district told this newspaper on Monday.

The forest department has initiated measures to evacuate the monkeys from the waterlogged hill after locals took up the matter with the Kanker district administration recently.

“Construction of the makeshift bridge has begun a couple of days ago. The monkeys will have the option of moving to land after the hill is connected to the land by the bamboo bridge”, chief conservator of forest (CCF) of Kanker R Nayak told this newspaper. He however said the mound has enough vegetation to sustain monkeys for a long period.

“In fact, the hill where fruit bearing trees and other plants have grown is a natural habitat of monkeys”, he added.

The waterlogged hill has turned an island due to heavy rains in the outgoing monsoon in the area, leaving monkeys who frequent the area to feed on fruits and plants, stranded for the last two months.

The forest department has started sending pumpkin, papaya and guava by boats to the hill to feed the monkeys to ensure that the simians did not starve for want of food.

The ‘relief materials’ also comprised biscuit packets. The foods were carried in boats to the ‘island’ in the morning and evening everyday for the last two days, a senior officer of Kanker district administration revealed.

The Bajrang Dal has mounted pressure on the Kanker district administration to provide relief to the stranded simians and evacuate them to safety, by making it a religious issue. This has forced the local administration to spring to action, sources said.

The sub-divisional officer (SDO) of Kanker district has been monitoring the rescue and relief operations, official sources said.