India   All India  19 Nov 2018  Now or never for us in MP, says Jyotiraditya Scindia
India, All India

Now or never for us in MP, says Jyotiraditya Scindia

Voting will take place for 230 Assembly seats on November 28, while counting is scheduled for December 11. 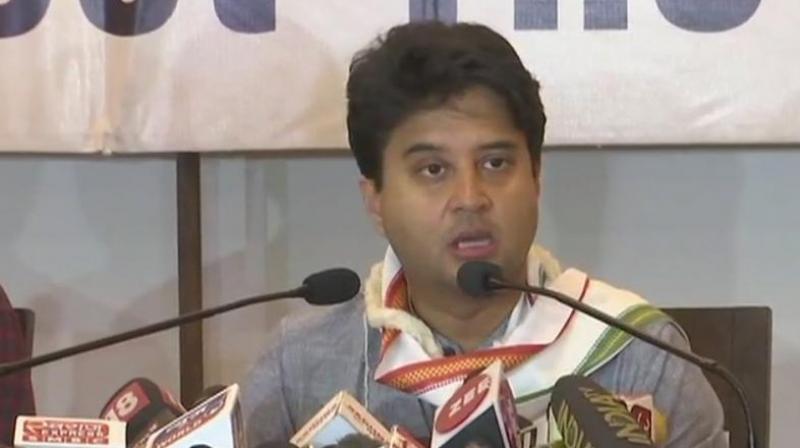 Shivpuri (MP): As his party makes an all-out effort to wrest control of Madhya Pradesh from the BJP, senior Congress leader Jyotiraditya Scindia feels it is “now or never” for the grand-old party that has remained out of power in the state for 15 straight years.

Mr Scindia, a powerful Congress leader from the state, however sought to steer clear of reports about rift among party leaders for the chief ministerial post and said he is not running for any chair and his sole aim is to ensure that his party forms the government.

The Member of Parliament from the Guna-Shivpuri constituency, who secured a win during the last Lok Sabha elections in 2014 despite most of his party colleagues facing a defeat amid a widespread Modi wave at that time, has toured close to four dozen assembly constituencies in last six days and plans to cover 50-60 more seats before campaigning ends on November 26.

Voting will take place for 230 Assembly seats on November 28, while counting is scheduled for December 11. The state has always seen a direct fight between the BJP and the Congress, though the saffron party has been in power continuously since defeating the Congress in 2003.

Talking to PTI during his election campaign, Mr Scindia said his party needs to be relentless until 5 pm on November 26 when the campaign would end. Asked if this was the best opportunity for the Congress to come back to power in the state which it has ruled for the maximum time since Independence, the former union minister said, “Well best or not, it is now or never. Full stop. When I say now or never that says it all.”

“Therefore, I wanted to put all my energy into campaign for the Congress party. As the campaign committee chief that is my direct responsibility,” he said.

To a question if he would be the chief ministerial candidate if his party wins the polls, the 47-year-old scion of the royal family of Gwalior said he will abide by whatever the party decides for him.

Prodded further on the subject and asked if he will contest polls to hold the chief minister’s position if his party wins, Mr Scindia had a brief comment: “We will see at that point of time.”

“My only aspiration is to serve the people. I am not myself running for any post. What I would want to see is that my party comes into government so that people get served in the right manner,” he said.