3 young women to visit Sabarimala only if 'friendly atmosphere' prevails

The women vowed that they would remove their 'sacred mala' (garland) only after offering prayers at the shrine. 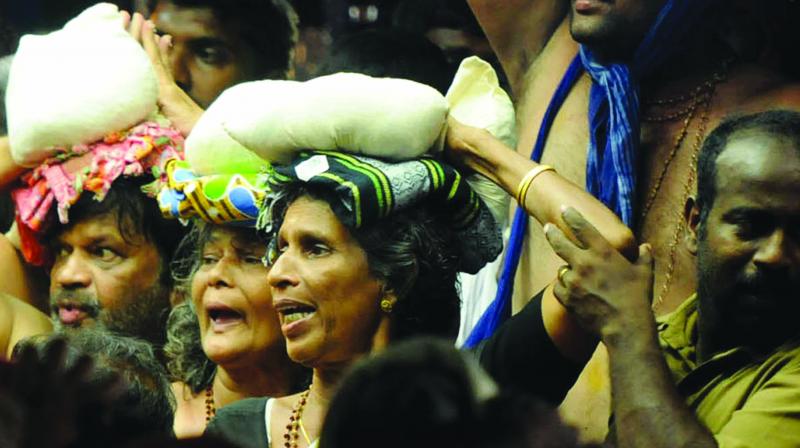 The women said they would not like to create any bad situation in the state because of their desire to go to Sabarimala. (Representational Image | PTI)

Kochi: Amid the stand-off over the entry of women of menstrual age into the Sabarimala shrine, three young women expressed their desire on Monday to visit the Lord Ayyappa temple, but said they would do so only in a "friendly atmosphere".

Reshma Nishant and Anila from Kannur district and Dhanya from Kollam district said they had been observing the "vritham" (the mandatory austerities for visiting Sabarimala) for visiting the shrine in the wake of the September 28 Supreme Court order permitting the entry of all women into the shrine. However, the situation prevailing in the state prevented their pilgrimage, they told a press conference.

The women vowed that they would remove their "sacred mala" (garland) only after offering prayers at the shrine.

A devotee, as a prelude to the pilgrimage, wears a beaded "tulsi or rudraksh mala" as part of renunciation of material temptations.

The women said they would not like to create any bad situation in the state because of their desire to go to Sabarimala.

"We will make an attempt to visit the temple only after a situation evolves in the state favouring our entry into the shrine," they said.

They complained that they were facing a lot of hardships after they started observing the "vritham" to go to Sabarimala.

The state witnessed widespread protests after the September 28 apex court order, permitting the entry of women of all ages into the temple. A large number of Lord Ayyappa devotees gathered outside the Press Club in Kochi, where the press conference was being held. They chanted Lord Ayyappa mantras, while protesting against the women for expressing their desire to offer prayers at the hill shrine.