Singh said that the recent 'back-to-back' successes achieved against terrorists in J&K was the result of free hand given to Army. 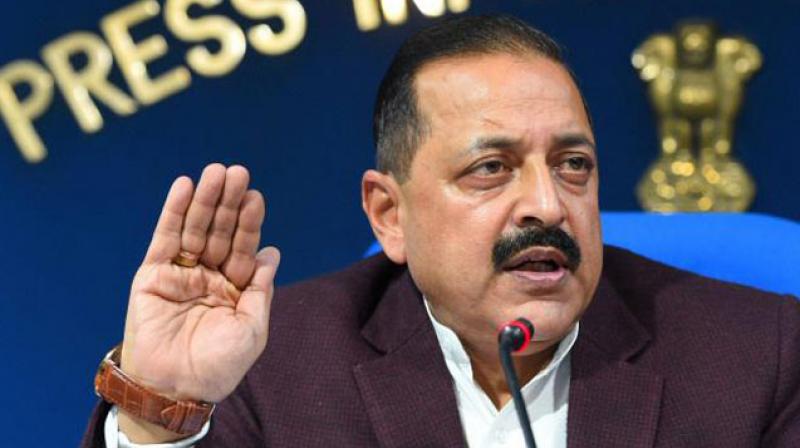 The minister said that he had been saying for the last several months that this was the last phase of terrorism in the state but there were people who were not taking the statement seriously. (Photo: PTI)

Srinagar: The government has taken note of reports about global terror group ISIS claiming an attack in the Kashmir Valley that left a police officer dead, union minister Jitendra Singh said, adding that the future course of action would be adopted after taking an appropriate view.

The Minister of State in the Prime Minister's Office also said that the recent "back-to-back" successes achieved against terrorists in Jammu and Kashmir was the result of the free hand given to security forces.

"The government has taken cognisance of inputs and the concerned agencies, the ministry of home affairs and the security agencies, are taking an appropriate view and will adopt future course of action accordingly," Singh told reporters when asked about the ISIS claiming its first terror attack in Jammu and Kashmir through its propaganda wing, Amaq news agency.

Three terrorists in a car opened fire on a police team at Zakura crossing on the Srinagar-Ganderbal road, killing Sub-Inspector Imran Tak and injuring a special police officer (SPO) on Friday.

The retaliatory action left a most wanted local terrorist dead, whose body was wrapped in ISIS flag during funeral procession.

Responding to a question about the killing of six Pakistani terrorists, including the nephew of Mumbai attack mastermind Zaki-ur Rehman Lakhvi, in an encounter in Bandipora district on Saturday, Singh said this was the result of the "decisive initiative" taken by the Narendra Modi-led government.

"The free hand given to security forces to perform with professional freedom is behind such back to back successes. This is possibly the last phase of militancy in Kashmir," he said.

The minister said that he had been saying for the last several months that this was the last phase of terrorism in the state but there were people who were not taking the statement seriously.

"The life span of any commander has been reduced to a few weeks -- 10 to 15 weeks. Once a commander is appointed, the second is being kept ready to take over. The time has gone when they used to live for years," he said.

He said it was for the first time in the last quarter of a century that there is a government in place in New Delhi which is working on the principle of clarity, conviction and consistency and does not interfere with the professional work being done by security forces.

Lauding the local police, he said the manner in which the special operations group performed is testimony to the fact that if given the right opportunity without intimidation, the force is capable of doing wonders.

On the surrender of college student and footballer Majid Arshid, who had joined the Lashkar-e-Taiba a week ago, Singh said the change was already there but it was just a veil of fear which was holding them back.

"Once the Modi government decided to initiate decisive action, this veil of fear has been taken away and the boys and girls are feeling free enough to come forward and express their aspirations," he said.

He said what Pakistan was doing has never been a secret but what is different today is that the common man in Kashmir, particularly the youth, is now ready to join the mainstream development journey led by PM Modi.

"This change started actually two years ago and that is the reason today, this year also we have 19 young boys and girls qualifying for the IITs," he said.

On Pakistan's role in fomenting terror, Singh said that all the information was already available but it was only Islamabad that was in a denial mode.

"But what has changed now in the past few months is that countries which were hesitant to accept India's view point for reasons of their own, are now constrained to accept India's viewpoint as far as terror and perpetration of terrorism from Pakistan soil is concerned. Pakistan also now feels constrained to no longer continue in denial mode," he said.